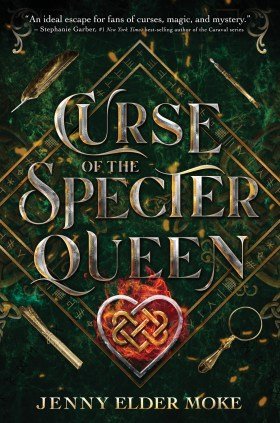 CURSE OF THE SPECTER QUEEN
(Book 1 of 2: A Samantha Knox Novel)

Set in the 1920s, Jenny Elder Moke’s Curse of the Specter Queen is high-stakes historical fiction fantasy with a female-driven plot. Samantha (“Sam”) Knox isn’t the same after her father is killed in the Great War. She turns away from her lifelong friends (brother and sister Bennett and Joana Steeling) and resigns herself to living a small life in their nowhere US town. She escapes the fate of being a laundress like her mother and, instead, uses her tenacious puzzle-solving skills to work at book restoration in the Steeling’s store.

When an unexpected package shows up bearing a damaged diary, Sam becomes embroiled in the mysteries surrounding this book. Before she knows it, she’s in Ireland trying to stop an occult ritual from resurrecting the Specter Queen, the Celtic goddess of vengeance and death. To do this, she must find an ancient bowl carved from the tree of life. Along the way, there are plenty of red herrings and a blossoming romance.

Because Sam evolves enormously over the course of the book, this is also a coming-of-age story. Complexities of Sam’s relationships with her friends unfold as Sam realizes she’s shut others out and now hopes it’s not too late to mend tattered ties with her previous BFF, Jo—truly a well-written character for how she snubs (with humor and levity) the constraints placed on women during that time.

I like how fantasy and historical fiction are blended into an apocalyptic story that pulls you back in time. In the end notes, the author states there were truly excavations carried out at Montpelier Hill in South County Dublin and that she utilized the research and findings of the Hellfire Club Archaeological Project and Abarta Heritage.

While perfectly suitable for a YA audience, the book would also appeal to readers of New Adult because of the independence of the characters and the lack of parental involvement. Book two in the Samantha Knox series continues on with another 1920’s adventure, this time on the island of Crete. Rise of the Snake Goddess comes out in June 2022. Sign me up for more nonstop thrills with this likable trio!