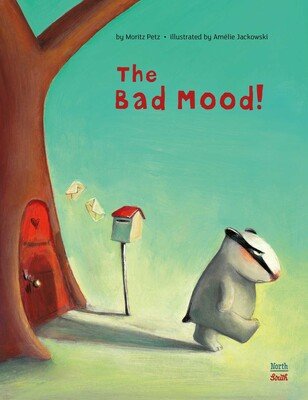 Badger woke up in a bad mood! After working in his garden, he starts to feel better but knows he must make amends when he finds out that his grumpy, rude remarks from the morning have left his friends upset with him in The Bad Mood! written by Moritz Petz, with illustrations by Amélie Jackowski. Now available as an unjacketed hardcover, this beloved classic has been translated into more than ten languages.

Bad moods are quite contagious and relatable to most children and adults. Like Badger ultimately realizes, a bad mood can consume all of our senses. Jackowski’s drawing of Badger’s long face says it all as does Petz’s prose when Badger says, “I’m in a bad mood today! This might be dangerous. Maybe I’d better stay at home.” If only he’d gone with his gut.

Deciding that his forest friends should notice that he is in a bad mood, Badger angrily sets out to begin his day. “Everybody ought to know how miserable I feel.” The pale green sky is the only thing calm as he stomps away from the door of his treehouse causing the mail to fly out of the mailbox.

Turning the page, the reader is greeted by cheerful Raccoon with his long striped black-and-white tail and yoyo in hand. Raccoon does what we assume he does whenever he is greeted by a friend and wishes Badger a good morning. “’Good morning? What’s so good about it?’ Badger replied, and stomped off.” Raccoon stood there shocked that not even so much as a goodbye was offered!

Badger’s mood becomes more explosive when Moose asks if he slept well and Badger counters it is “none of your business.” Badger is pleased with his response liking that both Deer and Raccoon know he is in a bad mood. He continues along his walk and passes more friends and “He was as rude to them as he could be.” This becomes a teachable moment for parents and caregivers. A discussion on how to treat people may even be initiated by little ones who realize this behavior does not win friends.

After Badger’s walk, he begins to work in his garden and as he was “digging and weeding, the strangest thing happened. His bad mood just slipped right off him.” But when he went out to play with the animals in the late afternoon the woods were silent. Unfortunately, the tables had turned and Raccoon was in a bad mood. So were Squirrel, Mouse, and Hare.

It is then that Badger confides in Crow and the two come up with an idea to have a “bad-mood party.” Jackowski’s gorgeous art decorates the forest with smiling friends and colorful lanterns. Children see a happy scene when Badger asks for forgiveness and it’s given.

Petz’s words model for youngsters how to apologize when they have done something they are not proud of. This beautifully written story is sure to invite multiple reads. Its simple but valuable lesson, that it’s normal to sometimes be in a bad mood, reminds kids that taking a deep breath is much better than taking it out on your friends. The Bad Mood! needs to be added to the mindfulness section in school classrooms.