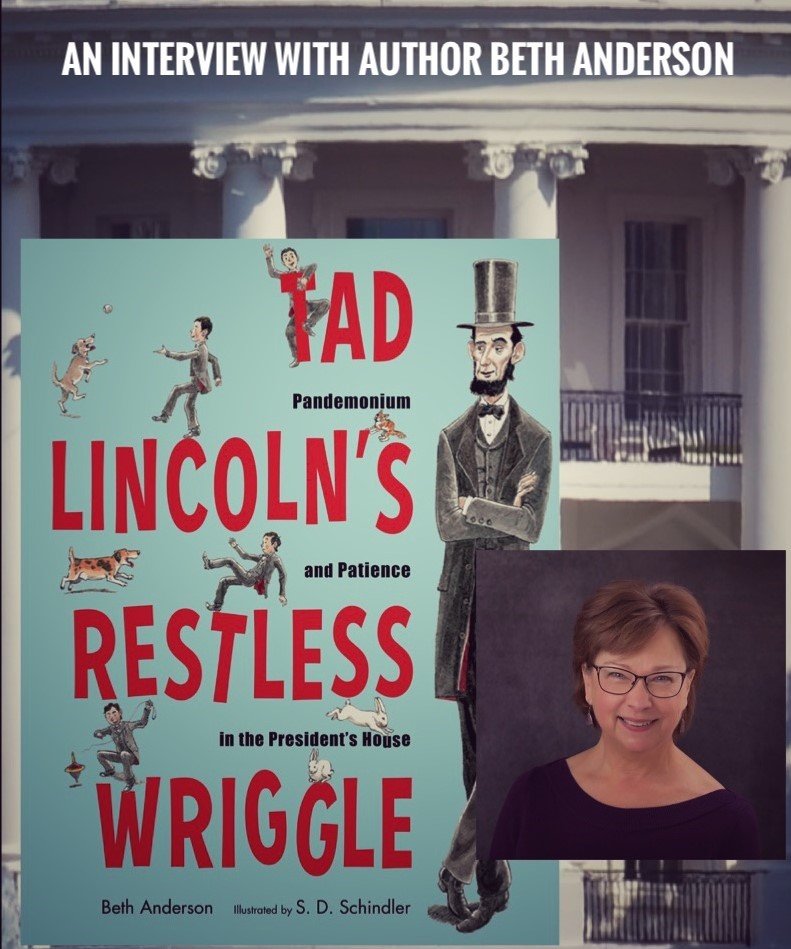 PANDEMONIUM AND PATIENCE IN THE PRESIDENT’S HOUSE 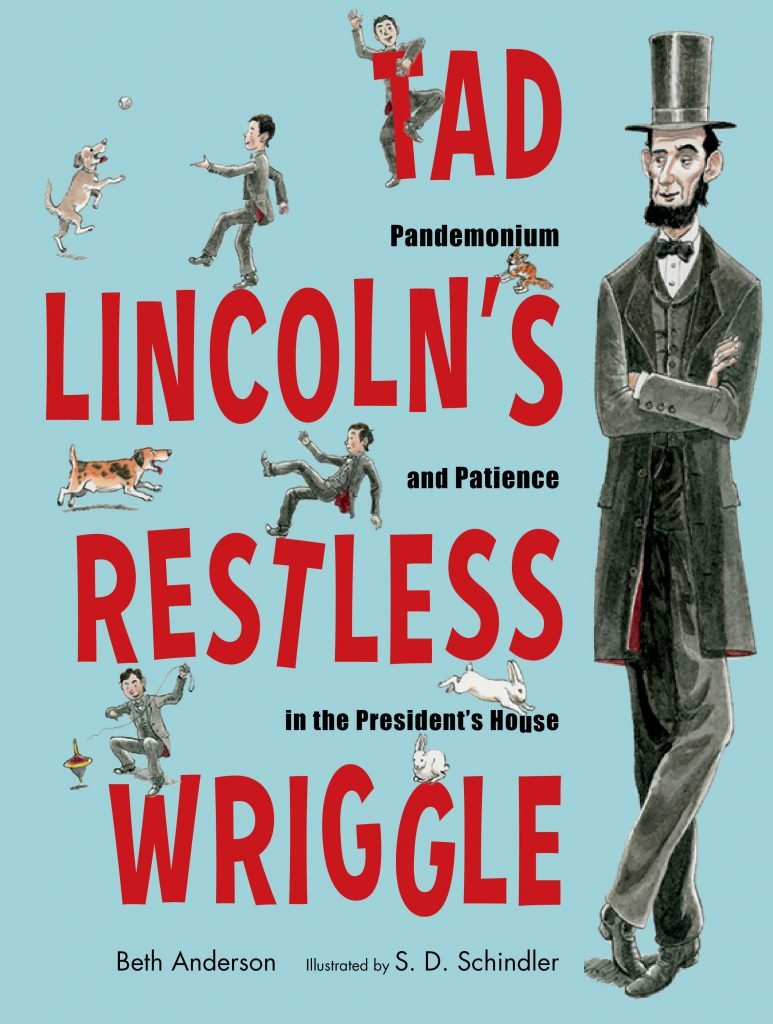 Tad Lincoln’s boundless energy annoyed almost everyone but his father, President Abraham Lincoln. But Tad put that energy to good use during the tough times of the Civil War. Abraham Lincoln guided Tad’s wriggle on visits to hospitals, to the telegraph office, and to army camps. Tad greeted visitors, raised money for bandages, and kept his father company late into the night. This special and patient bond between father and son was plain to see, and before long, Tad had wriggled his way into the hearts of others as well. Beth Anderson and S. D. Schindler follow Tad’s antics during the Civil War to uncover the generous heart and joyful spirit that powered Tad Lincoln’s Restless Wriggle.

Colleen Paeff: Hi Beth! Congratulations on a busy couple of years! If I’m not mistaken, your debut picture book, An Inconvenient Alphabet: Ben Franklin and Noah Webster’s Spelling Revolution, came out in 2018 and by the end of 2023, you will have eight picture books out in the world, all nonfiction! That’s amazing! How do you manage to be so prolific?

Beth Anderson: Thank you, Colleen! It’s all very surreal! I don’t feel prolific. It takes me a long time to get a manuscript in shape. I think the surge for 2022 is due to a few manuscripts that I had worked on earlier that are finally making it out in the world, along with a scheduling change. I feel like my production of new stories has slowed as I learn to juggle more tasks. Only three of the eight technically qualify as nonfiction, but I think all but one will be shelved as biographies.

CP: Your books have covered stories from the 18th, 19th, and early 20th centuries. When you started writing for children did you know you would focus on mostly true stories from history or has your career evolved that way over time?

BA: I started off playing with fiction. But when I worked on a story I’d become familiar with in college (which sat in my head for a very long time!), I found my niche with historical stories. I love the discovery of little-known bits of history that open your eyes to a wider understanding of the world. The bonus of humor is irresistible. And ultimately, if a story opens your heart, too, that’s the best!

CP: Do you have a favorite time period to write about?

BA: While I don’t have one favorite, I find the era surrounding the American Revolution fascinating. It may be because there is so much more there than what made it into textbooks and curriculum. There are so many contradictions and ironies, and so many aspects of revolution playing out in people’s lives. I love that Hamilton, the musical,  has brought intense interest to that time along with new ways of looking at it. Suddenly history is popular culture! Gotta love it!

CP: Absolutely! I love that Tad Lincoln’s Restless Wriggle shows readers a side of Abraham Lincoln that we don’t usually see in books. How did you discover this sweet relationship and what made you decide it would make a good book?

BA: I started out looking into Tad Lincoln as the instigator of the first presidential turkey pardon. (Lincoln had previously granted a pardon to one of Tad’s toy soldiers. 😄) When I dug deeper looking for the heart of the story, I discovered the very tender relationship between father and son. Each provided the other with what they desperately needed. Tad provided joy and hope when his father was in the depths of despair. And Papa patiently guided Tad with love and understanding when everyone else just wanted to shut him down. It was powerful to see a child play such an important role, and that became the heart of the story. For me, the goal is always to find the humanity in history, to connect as people. Seeing Lincoln as a caring father is a great reminder that historical figures are much more complex than the images we usually encounter.

CP: In the back matter you mention that the book focuses on one year in Tad Lincoln’s life. Why did you choose to limit yourself to one year and what made you choose 1863?

BA: As I collected stories of the two, I found a sort of transformation of Tad in 1863. By focusing on that year, I could eliminate some of the other Lincoln events, like Willie’s death and the assassination, and really hone in on Tad and Papa. I found an arc of events that took Tad from disruptive, to well-intentioned annoying, to slowly finding ways to appropriately help his father and others. The turkey pardon became a culminating event in which Tad found his voice and agency.

CP: What are some of your favorite stories about Tad that didn’t make it into the book?

BA: One that was cut—he sawed up the dining room table and used barrel staves to construct rocking chairs for the Old Soldiers’ Home. His toolbox disappeared after that one.

There are stories about Tad and Willie playing with the bell system in the President’s House and causing problems. They also played on the roof with pretend cannons, and they found all sorts of fun stuff in the attic. Tad used to ride his pony as “security detail” to accompany his parents in the carriage. There are many touching anecdotes that helped me get to know him.

CP: What fun stories! What do you hope readers will take away from Tad Lincoln’s Restless Wriggle?

BA: I hope children will see goodness and capableness in themselves and others despite what might appear to be annoying behavior or uncomfortable differences. To me, the story is about perspectives, too. Incapable boy vs a child with learning differences.  Undisciplined trouble vs unbridled good intentions. The President’s House vs home.

CP: How do you go about finding little-known stories from history? Do you have any favorite resources?

BA: I subscribe to various news feeds, keep my eyes and ears tuned for possibilities, and often find something while I’m looking into a different topic. I explore history sites sometimes, but there’s no one place.

CP: How do you keep your research organized?

BA: I’ve slowly developed my system. I use a spiral for gathering information. I label the first page Table of Contents and use what has become a standard list of things I know I’ll need – like sources, contacts, title ideas, structure ideas, key concepts/themes, back matter possibilities, teacher ideas, timeline, character details, and much more. I need to be able to sort what I find into usable categories and capture ideas as they pop so I can locate those pieces when I need them. I did a post on my blog a few years ago called Organization Optimization. I often buy used copies of books I need so I can mark them up. I copy or print a lot of articles and relevant pages to have in hand. I keep all my accumulated pieces in a pocket file.  [see the photo of spiral below]

CP: That sounds like a terrific system! I will definitely be stealing some organization ideas from you! What are some of the most surprising things you’ve learned in researching your books—all of them, not necessarily just the most recent?

BA: Now that I think about it, I think they are all about something that surprised me—like Ben and Noah’s efforts to change our spelling and “Smelly” Kelly’s nose. I guess that’s a lot of what draws me to a story.

A few tidbits. I was surprised to learn that Black men could have served on a jury in New York in 1855. To attend court, Elizabeth Jennings’ family would have had to walk across the ice to get from Manhattan to Brooklyn in February 1855. I was totally shocked that James Kelly pulled a 30” eel out of a subway sink drain. There are phones in the subway tunnels marked by blue lights. Horns were used as hearing aids—per S. D. Schindler’s illustration in Tad’s story. I didn’t know that men paid bounties for others to serve in their place in the Continental Army. (So really, the wealthy finding a way out of military service is nothing new. Actually, I get those surprises often, that some of the problems and situations we have are really nothing new.) Every story is full of surprises. There are the ones that bring you to the story, and then so many more as you write and vet for accuracy.

CP: Those kinds of surprises are what I love about writing nonfiction! What’s next for you, Beth?

BA: 2022 is a busy year with three releases! REVOLUTIONARY PRUDENCE WRIGHT: LEADING THE MINUTE WOMEN IN THE FIGHT FOR INDEPENDENCE, illustrated by Susan Reagan, releasing Feb. 1, and FRANZ’S PHANTASMAGORICAL MACHINE, illustrated by Caroline Hamel, releasing May 3 are up for pre-order now. CLOAKED IN COURAGE: UNCOVERING DEBORAH SAMPSON, PATRIOT SOLDIER, illustrated by Anne Lambelet, comes out Nov. 15.

I’m on pins and needles waiting to see what Jeremy Holmes does for our 2023 release, THOMAS JEFFERSON’S BATTLE FOR SCIENCE: BIAS, TRUTH, AND A MIGHTY MOOSE. And there’s another title in process, as yet unannounced.

CP: Incredible! I look forward to reading them all! Thank you so much for taking the time to chat.

BA: Thanks so much for inviting me to share TAD LINCOLN’S RESTLESS WRIGGLE with your readers! I’m honored!

Beth Anderson, a former English as a Second Language teacher, has always marveled at the power of books. With linguistics and reading degrees, a fascination with language, and a penchant for untold tales, she strives for accidental learning in the midst of a great story. Beth lives in Loveland, Colorado where she laughs, ponders, and questions; and hopes to inspire kids to do the same. She’s the award-winning author of TAD LINCOLN’S RESTLESS WRIGGLE, “SMELLY” KELLY AND HIS SUPER SENSES, LIZZIE DEMANDS A SEAT!, and AN INCONVENIENT ALPHABET. Beth has more historical picture books on the way, including three more stories of revolution, wonder, and possibility in 2022.

Colleen Paeff is the author of The Great Stink: How Joseph Bazalgette Solved London’s Poop Pollution Problem (Margaret K. McElderry Books), illustrated by Nancy Carpenter, and Rainbow Truck, co-authored with Hina Abidi and illustrated by Saffa Khan (available in the spring of 2023 from Chronicle Books).