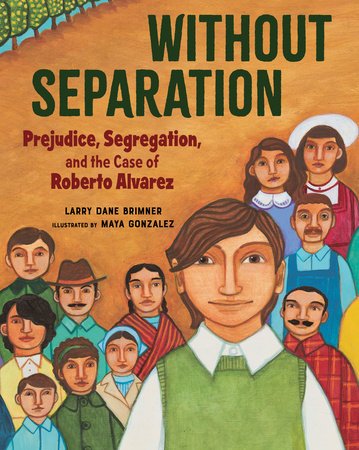 Prejudice, Segregation, and the Case of Roberto Alvarez

I could not put down the nonfiction picture book Without Separation because, like the compelling but little-known case presented in the recently reviewed We Want to Go to School, this eye-opening account is about a civil rights case I had never heard about yet think everyone should.

Readers meet Roberto Alvarez on his way to school on January 5, 1931, just after the Christmas break. When the 12-year-old arrived at Lemon Grove Grammar School, “the principal told Roberto and other Mexican and Mexican American children that they did not belong there.” It soon became clear that the children were going to be segregated under the guise that the Mexican children didn’t understand English and were holding back white students.

I was stunned upon reading that the board of trustees of the school district had gone ahead and had another school built to separate these children. On top of that, they did it without telling the Mexican parents. They thought they were avoiding trouble this way but what they were doing was wrong or they would have been more transparent.

They may have thought that by going behind parents’ backs they could get away with their ploy but the inhabitants of the Mexican barrio knew better. Roberto’s parents had told him to come home if he were sent to the new Olive Street School, aka the barnyard.

That fateful morning, Roberto and a large group of other students refused to attend. While the school district tried to spin Olive Street School as a way to help the children learn English and American customs, Roberto, his parents, and other families knew the truth. This was a blatant and seemingly illegal attempt to segregate the students based on race.

Fortunately, the families quickly organized themselves. When they met with the Mexican consul, he connected them with a couple of lawyers to help them. “Roberto brought the situation in Lemon Grove to the attention of the California Superior Court in San Diego on February 13, 1931.” A lawsuit against the board of trustees of the Lemon Grove School District was filed stating how Roberto wanted to go to the same school as the white students, where he’d gone before the new year.

The school board felt overly confident about winning the case because San Diego’s district attorney was on their side, but mistakes were made. The D.A. tried to get the case dismissed but luck was not on his side.

The judge ultimately ruled in favor of Roberto Alvarez who the school district tried to prevent from returning to the local school he’d previously attended. The law said the lead plaintiff (and therefore all the others affected) had every right to attend the Lemon Grove Grammar School “without separation or segregation.” This important case along with several others was cited “before the US Supreme Court when it made its landmark Brown v. Board of Education of Topeka (Kansas) decision of 1954 that outlawed school segregation.” And though the struggle recounted in Without Separation took place almost 91 years ago, the facts surrounding this case feel as relevant today when prejudice against the immigrant communities here in the U.S. continues and racial-based inequalities linger.

Author Brimner has written a timely and terrific book for today’s generation of children to gain greater insight into the power of community, commitment, and the change that even “one small voice” can make. Gonzalez’s gorgeous artwork, reminiscent of Mexican muralists with its bold lines and rich colors, helps bring this story to life.

Eight pages of interesting back matter go into more detail about the case including what happened to the principal Jerome J. Green. There are photos along with information about other similar lawsuits. I was happy to read how Roberto Alvarez became a successful businessman, civic leader, and philanthropist in San Diego before he passed away in 2003. It’s great that this book is available for families, schools, and libraries so readers can have a greater appreciation of the significant impact of Roberto Alvarez v. the Board of Trustees of the Lemon Grove School District.