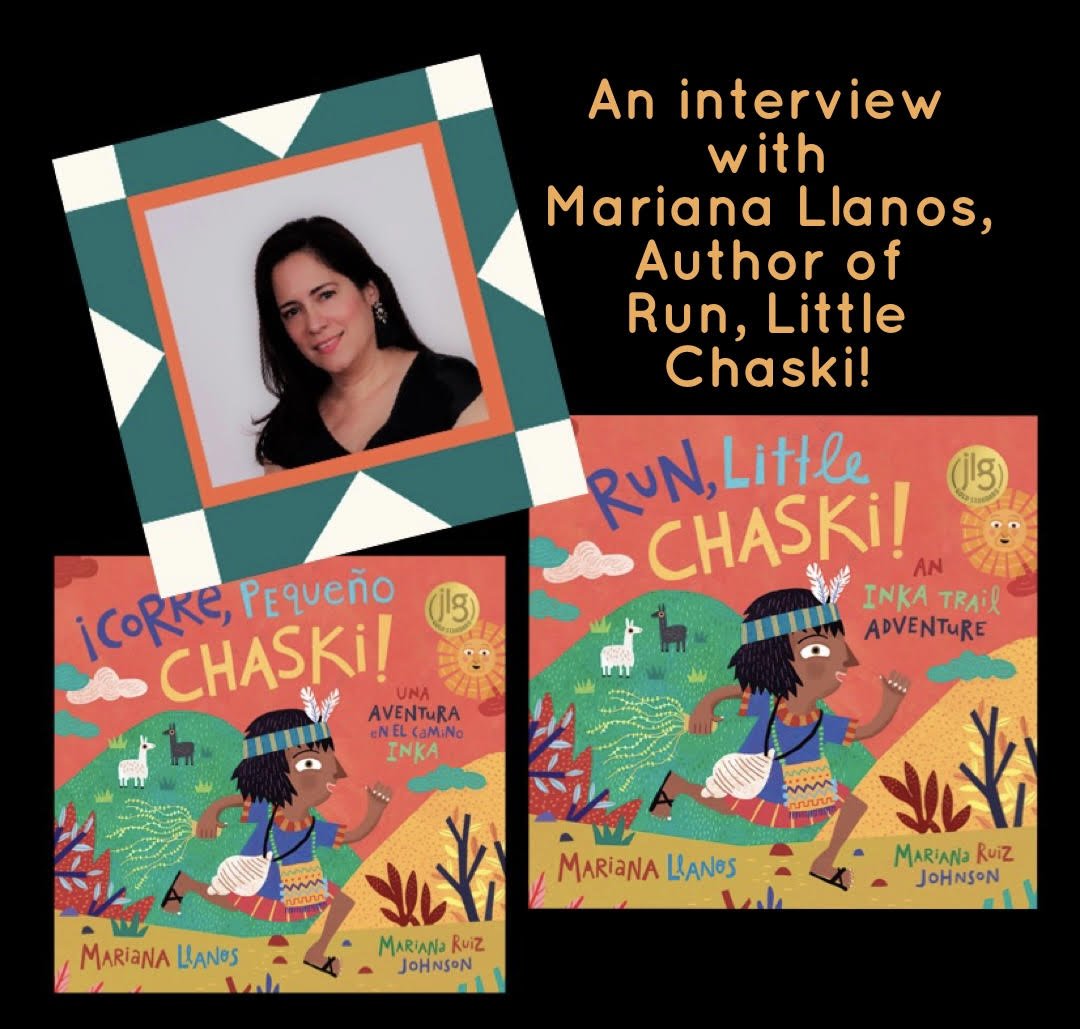 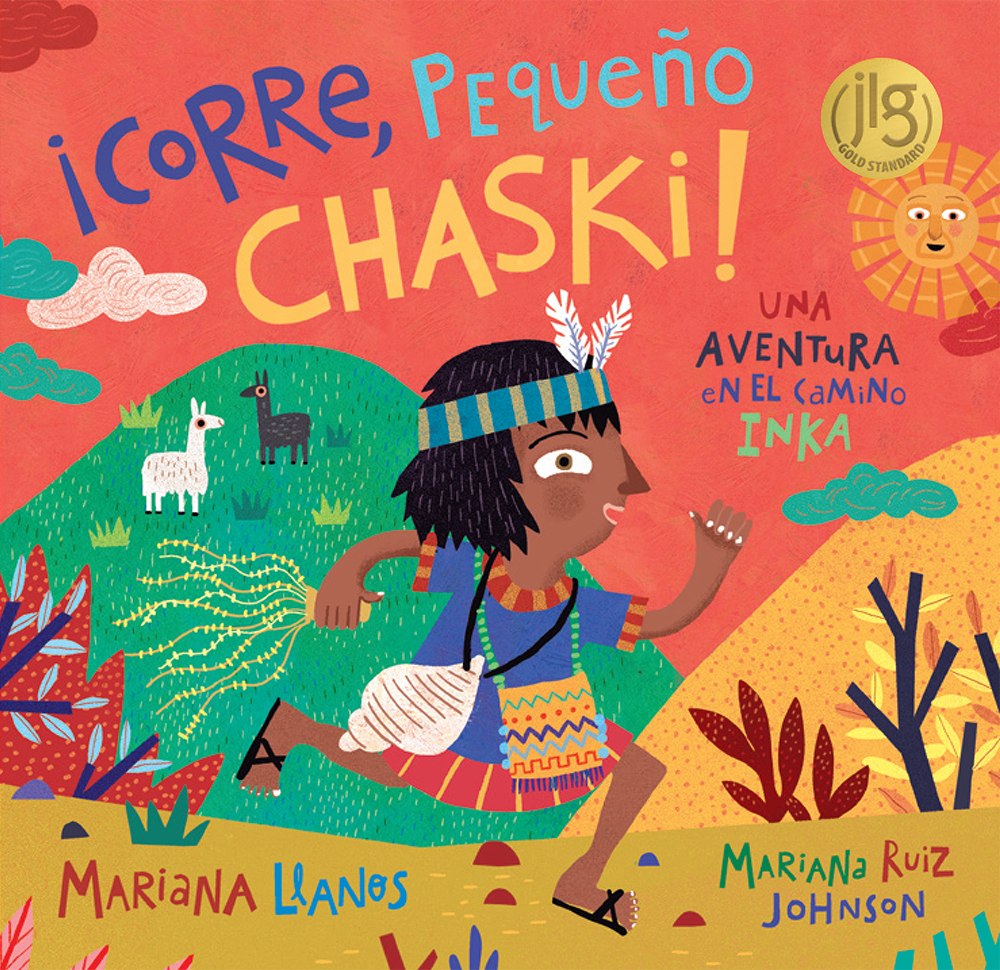 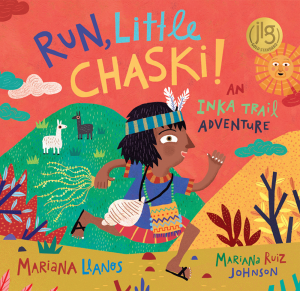 In this tale set in the ancient Inka (sometimes spelled Inca) empire, Little Chaski has a big job: he is the Inka King’s newest royal messenger. On his first day delivering messages he stops to help several creatures in need along the way, causing him to nearly miss his sunset deadline. But the kindness he bestowed on these animals winds up helping him in surprising ways. Descriptive language and bold illustrations give readers insight into Little Chaski’s nervousness and excitement as he runs the Inka Trail, working earnestly to fulfill the responsibilities of his new role.

Colleen Paeff: Hello, Mariana! There is so much I want to talk to you about, but let’s start with your most recent book. Run, Little Chaski: An Inka Trail Adventure, which I had the pleasure of seeing when it was just a manuscript! Congratulations on the two starred reviews and the Junior Library Guild Gold Standard selection! Can you explain to our readers what a chaski is?

Mariana Llanos: Hi Colleen! I’m excited to be talking about it with you! You’ve seen this story from its first drafts. The word chaski means messenger in Quechua. Chaskis were a relay system of messengers used during the Inka Empire. They delivered official messages through the vast territory of the Tawantinsuyu. When the Spanish invaded, they were so impressed by the organization of this system, they even kept it running for some more years. 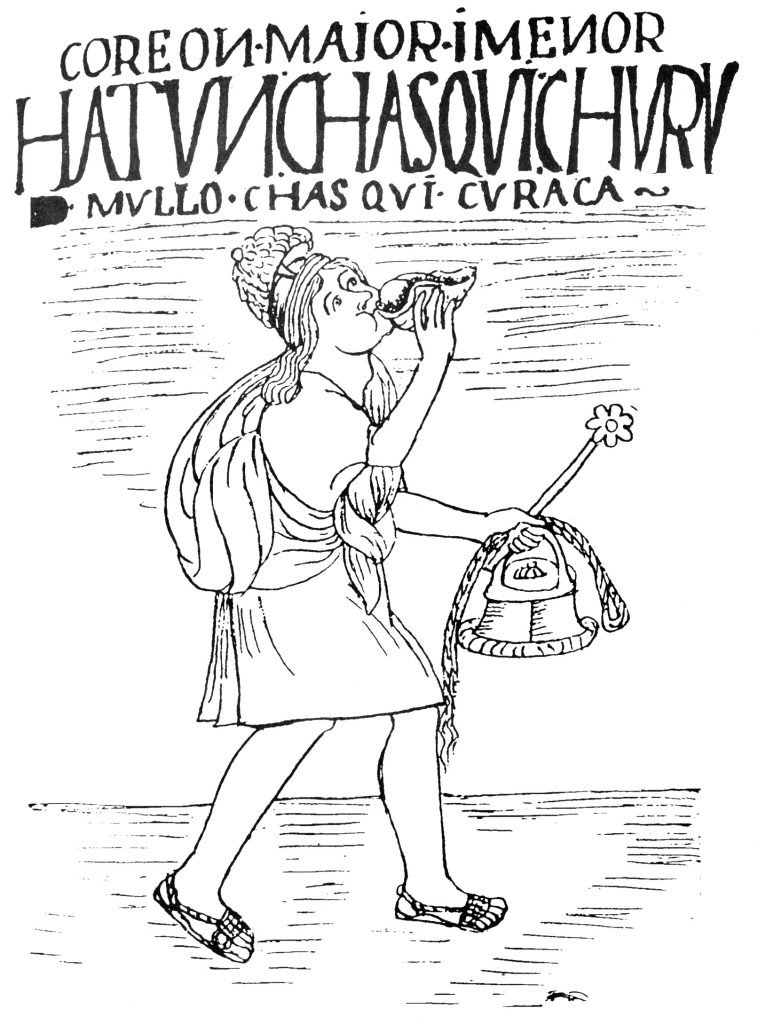 CP: Did you first hear about chaskis as a child growing up in Perú, or did you learn about them later in life?

ML: I learned about chaskis in Perú. They’re an important part of Peruvian history and culture so I learned about their system in school. The word chaski is also used as a name for different tourism-based businesses so I was familiar, although I did research more in-depth when writing this book. I read several non-fiction books to make sure I was getting everything right. I discovered there was a lot more to learn about the Inka, since the studies of their culture keep on advancing and more theories develop. Writing a book rooted in your own culture is a huge responsibility to bear on one’s shoulders. I really wanted to get it right.

CP: You manage to pack so much information into the backmatter of this book. You talk about the Inka empire, animals of the Andes, chaskis, and more–and it’s all told in a way that the youngest readers will understand. Did you know from the start the book would have an informational aspect to it or did that develop over time?

ML: It evolved. In the beginning I had an author’s note with some information about the Inka and the Chaskis, but then my editor, Kate DePalma, thought it would be best to break down the information. I really like it now because it’s easier to see and process, especially for young readers. The team at Barefoot Books took what I had already written in the author’s note and added more sections. Later, I went over it and made corrections, and added additional information.

CP: In 2017 you received an Oklahoma Human Rights Awards from the Oklahoma Universal Human Rights Alliance, and the United Nations Association Oklahoma City Chapter. That must have been such an honor. How does writing for children help you to address human rights?

ML: It was an honor that I take very seriously. I feel like writing for children allows me to plant a seed of peace. It allows me to offer a mirror and a window. All children have a right to live in peace and they should have the right to see themselves reflected in books. Books allow kids to imagine a world that is inclusive for all, they allow them to dream of a fair and just society. Through books we can also tackle big important issues like climate change, sustainability, so that’s the direction I’m heading with my stories. Writing for children is a tremendous responsibility.

CP: Your book Luca’s Bridge/El Puente de Luca tackles immigration and deportation—very tough topics—but it’s also about resilience and family. What was the process of writing that book like? How did you find a way to add hope to such a difficult story?

ML: There was a lot of crying involved. It’s such a tough topic, but it was a story I wanted to tell. In the story, Luca’s parents are deported as they’re undocumented, while he is an American citizen but has to travel to Mexico with his parents. It is reversed from the immigration stories we usually hear, but I knew from the news that there are thousands of children in this situation. I know I couldn’t give this story a traditional satisfying ending, but I knew I had to at least weave some hope into it. As an immigrant myself I know how terrifying the thought of being deported is, but I also tried to put myself in Luca’s shoes. To me, as long as I have laughter, music, and family I’d know that eventually, I would be okay. It was important to offer my readers an opportunity to empathize with a person in this situation. We often hear a lot of judgment against people who are undocumented, but what would YOU think if you were part of a mixed-status family, like so many in the United States? 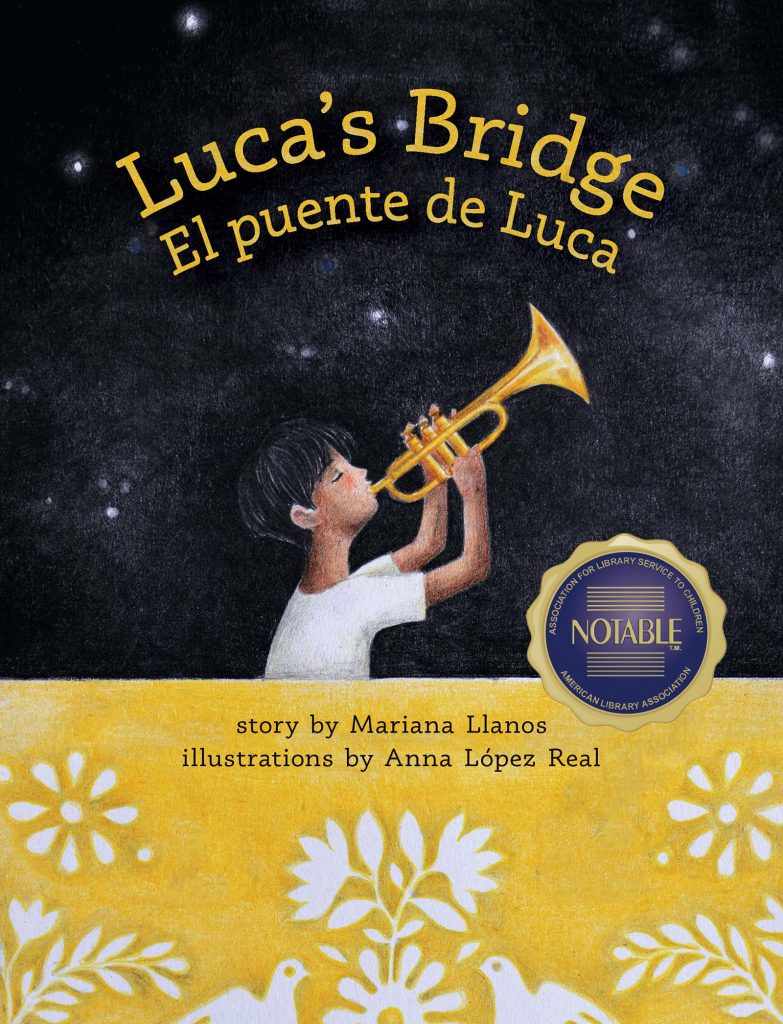 CP: You did such a wonderful job of putting the reader in Luca’s shoes. And the illustrations by Anna López Real add such a beautiful, dreamy quality to the story. What did you think when you first saw them?

ML: Colleen, there was even more crying! They are so evocative and powerful. Anna is such a talented person and couldn’t be happier to have shared Luca with her. It was a similar feeling when I saw Run Little Chaski’s illustrations. I had no idea they could make the story so much fun. I am in constant awe of the talent of the illustrators I’ve been paired with.

CP:  In addition to writing (and raising a family and working!), you do a lot of school visits. How do you fit it all in!? Do you have any favorite productivity hacks you can share with us?

ML: I schedule everything in my phone calendar. If I don’t immediately add it to the calendar, then forget it, it won’t happen. It took me a long time to learn to organize myself, but I think I have managed to learn to block my time. My mornings are for my writing and school visits. Afternoons for other work and kids. Family always comes first though, so I don’t feel bad if I have to cancel anything when my family needs me.

CP: In addition to being a traditionally published author, you have also self-published some books. What’s the biggest bonus to each of the different types of publishing?

ML: I have really enjoyed my journey in self-publishing. The biggest bonus is that I tell the stories I want to tell however I want to tell them. Self-publishing allows me to be creative without having to stick to industry standards for format, word count, long waits, even language. On the other hand, it is very hard to get noticed and for picture books, it gets expensive—I’m not an illustrator. But self-publishing is a great way to get our stories out, and I would consider it again to publish in Spanish as traditional publishing still doesn’t publish many authentic books in Spanish written by Spanish-speaking authors from the U.S. Most of what’s published in Spanish in the U.S, are translations, which is fine (there are very good translations of great books), but I think it’s a big bonus when the author writes in their own native language too.

CP: This past year, you started teaching writing classes in Spanish. Can you tell us a little about your classes?

ML: Yes, I began giving workshops about publishing. My goal is to reach Spanish-speaking people who want to begin publishing their stories. Most are bilingual, but like me, feel more comfortable speaking in their language, so this class is directed to them. One of my classes is an overview of the publishing industry. How to go from writing to publishing and the different paths to publish our stories. The class that I’m putting together now is called “El abc de los cuentos” and it will be about craft.

CP: That sounds terrific! In addition to teaching and school visits, what’s next for you?

ML: Currently, my awesome agent, Sera Rivers, is submitting my manuscripts. We have two chapter book series out on sub and a couple of PBs. Hopefully, I’ll get good news in the next few weeks. Everything in publishing moves slowly, but I keep myself from biting my nails by writing more and more stories.

CP: That’s an excellent strategy. I use it myself! Thanks for chatting Mariana. And good luck with your submissions!

ML: Thank you so much for having me, Colleen. My fingers and toes are crossed for my manuscripts and yours too. Thanks, everyone, for reading. 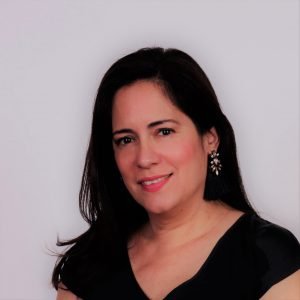 Mariana Llanos is a Peruvian-born writer of children’s books and poetry. She was raised in Lima, Peru, and moved to the United States in 2002. In 2013 she self-published her first book, Tristan Wolf. Nine books later, Mariana debuted as a traditionally published author in 2019 with Luca’s Bridge/El Puente de Luca (Penny Candy Books, illustrated by Anna Lopez Real). This book was selected as a 2020 ASLC Notable Book. Her next book Eunice and Kate (2020, Penny Candy Books, illustrated by Elena Napoli) won the Paterson prize Books for Young People 2021. Her latest book Run Little Chaski (2021, Barefoot Books, illustrated by Mariana Ruiz Johnson) is a JLG Gold Standard Selection and received starred reviews from Kirkus and SLJ.

Mariana lives in Oklahoma with her family.

Colleen Paeff is the author of The Great Stink: How Joseph Bazalgette Solved London’s Poop Pollution Problem, illustrated by Nancy Carpenter (available August 31, 2021, from Margaret K. McElderry Books) and Rainbow Truck, co-authored with Hina Abidi and illustrated by Saffa Khan (available in the spring of 2023 from Chronicle Books).