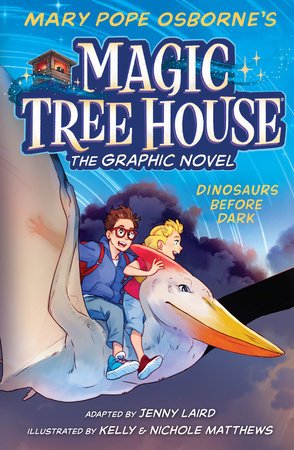 Illustrated by Kelly and Nichole Matthews

Any reader of Osborne’s beloved Magic Treehouse chapter book series knows that uttering those magical words while holding a book in the Magic Tree House will instantly transport the child back into the time and place of the book and an action-packed adventure.

This first title in the graphic novel adaptations of the chapter book series, Dinosaurs Before Dark, introduces eight-and-a-half-year-old Jack and his younger sister, Annie, residents of Frog Creek, Pennsylvania. While playing in the wooded area near their home, they discover a tree house filled with books. As they excitedly explore the books, Jack finds a book about dinosaurs. Gazing at one of the illustrations, he wishes he could go there. Suddenly, a giant wind begins to spin the tree house and whoosh! It whisks them away to the Cretaceous Period.

While exploring this new environment, they encounter a few of the period’s dinosaurs without incident until a very large and frightening Tyrannosaurus Rex comes roaring and stomping their way. After some hair-raising attempts to dodge it, they make it back to the tree house. Now they just need to figure out how they can get home in one piece … and in time for dinner!

Laird remains true to the original story and her dialogue, along with the Kellys’ illustrations, propel the storyline. Like the chapter book, the graphic novel is neatly organized into short chapters, each ending on a cliffhanger.

Illustrators Kelly and Nichole Matthews have modeled Jack and Annie after the Sal Murdocca illustrations for the chapter book. The Matthews, who are twin sisters, creatively combine detail, color, and a more complex layout to help interpret the chapter book’s narrative. The panels sequencing the tremendous wind that spins the house back into history include a vivid two-page spread (pp 26-27) that conveys the force of the wind. Another full page is used to dramatize the height of the tree house as Jack and Annie descend from it to a world no humans have ever seen (p. 62).

This graphic novel adaptation is a great introduction to the chapter book series for younger and emerging readers and could actually replace it in popularity since the format is much more vibrant and engaging than the original chapter book series. So while it’s recommended for ages 6-9, I think children as young as five years old would find it an entertaining read.

Check out this YouTube video to hear how Jenny Laird adapted Osborne’s novel. And for more about the Matthews sisters, visit their website. Fans can also check out the Magic Tree House website here.