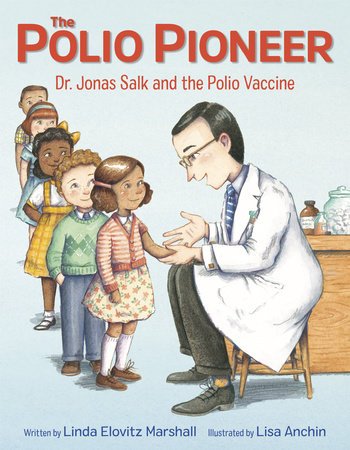 THE POLIO PIONEER:
DR. JONAS SALK AND THE POLIO VACCINE

A topic on everyone’s tongues these days is vaccinations. When she wrote this book, Linda E Marshall likely had no idea how relevant her book would be today and how once again, an innovative vaccine is saving lives around the world.

The book opens with four-year-old Jonas Salk sitting on top of his father’s shoulders during the victory parade celebrating the end of World War I. But Jonas doesn’t understand the cheering when all he sees are injured soldiers. Jonas, readers learn, sees things differently. Find out about the man and the story behind the life-changing vaccine he developed in THE POLIO PIONEER: Dr. Jonas Salk and the Polio Vaccine written by Linda Elovitz Marshall with illustrations by Lisa Anchin.

Anchin’s art brings a warmth to the subject of science painting in soft colors of oranges and blues as the reader walks through the life of the main character Jonas. Whether that’s refereeing his friends’ games when not reading because he knows the rules or helping his Yiddish-speaking mother learn English after his Jewish family migrates to New York City. The kindness and love of the Salk family are depicted with each page turn as the family celebrates Shabbat with freshly baked Challah and Jonas’ inner thoughts are shown “when Jonas prayed that he might someday, help make the world a better place.”

Marshall writes about the financial difficulties the Salk family faced, but Jonas kept moving forward “attending the City College of New York where tuition was free and where, unlike at many other colleges and universities, Jews were welcome.” With a grin on his face and apron tied around his neck, Jonas discovers chemistry while mixing liquids amongst classmates in the college lab. Salk is determined to gain a better understanding of science so that he can make medicines to help people and decides to become a doctor. Illustrated wearing glasses and a white lab coat, Jonas enters medical school where he befriends his teacher Dr. Thomas Francis and the pair team up with an idea as the flu is killing millions. “What if … a person was given some flu virus that was killed by chemicals so it could not cause disease?” Dr. Salk and Dr. Francis thought this could be a way of fighting the flu. And they were right.

With men, women and children lined up on the streets, dressed in their Sunday bests, a nurse in white stands next to one of Anchin’s realistic illustrations with a chalk-written sign reading FLU VACCINE CLINIC. “Since then, flu shots have saved thousands of lives each year.”

“But another disease was raging … Polio”. Readers see Franklin Delano Roosevelt sitting in a wheelchair in the oval office, as others are lined up in beds, victims of this new disease. People are shown hiding in their homes, just as we all have done these past fifteen months from COVID, and the similarities are not unnoticed. Today’s scientists learned a lot from Dr. Salk. “He and his team of scientists labored day and night, night and day.”

“On April 12, 1955, Dr. Francis joins the team and announced to the world: “The vaccine WORKS!” POLIO could be CONQUERED!” Dr. Salk continued his studies by establishing the Salk Institute for Biological Studies where they have worked on cures for cancer, HIV/AIDS, diabetes, multiple sclerosis, and many other problems.

Marshall writes in a way that makes a tough topic easy to follow with her understandable language and flowing sentences, while Anchin’s drawings transport the reader to 1918 and beyond. The timing of the release of this book last year during the pandemic could not have been more prescient and still resonates today with over 49% of the population vaccinated for Covid-19. As for polio, America has been free of the disease since 1979 due to the amount of participation. Maybe a picture book about our current pandemic will be next to teach future kids about what we have been experiencing. Marshall’s book is fabulous for elementary-age children and higher. In the Author’s Note, Marshall heartwarmingly explains the backstory behind her reasons for writing the book and how Dr. Salk is her hero. She thanks the Salk family for sharing family stories and photos, including writings from Michael Salk, grandson to Jonas. Dr. Salk, as Marshall tells, was a Mensch, the perfect Yiddish word to describe a man whose good work, kindness, and dedication helped make the world a better place. And he did.

See London and Get Ready for the Olympics With Candlewick Press

Today's review, by Rita Zobayan, arrives in time for us all to get psyched for…

Ladybug Girl and the Best Ever Playdate