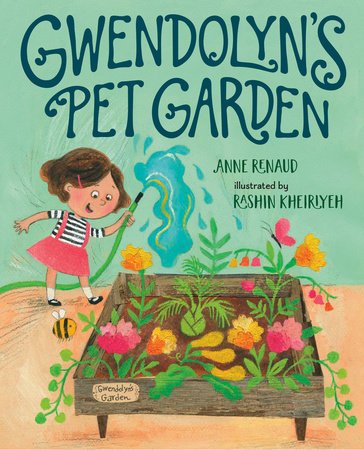 In the picture book, Gwendolyn’s Pet Garden by Anne Renaud, we know the problem from the opening line: “Gwendolyn Newberry-Fretz wanted a pet.” A very relatable problem indeed. Yet, Gwendolyn’s parents are not on board with the pet idea and, instead, get her some dirt which “smells of possibilities” to them. Gwendolyn thinks it smells like a swamp! Yet, once the garden gets underway, she reconsiders how she feels about this compromise.

Rashin Kheiriyeh’s illustrations peppered with bright accents pull you into Gwendolyn’s world, whether she’s suggesting various pets or plotting her planter. I feel the joys of gardening including the excitement of watching plants grow from seed.

I like how the back matter ties it all together, explaining what’s needed for kids to start their own gardens. Seed-lending libraries are explained and encouraged—a concept I hope catches on as well as the book-lending libraries we have in many neighborhoods. The idea of repurposing no-longer-needed library card catalog cabinets to house seeds brilliant!