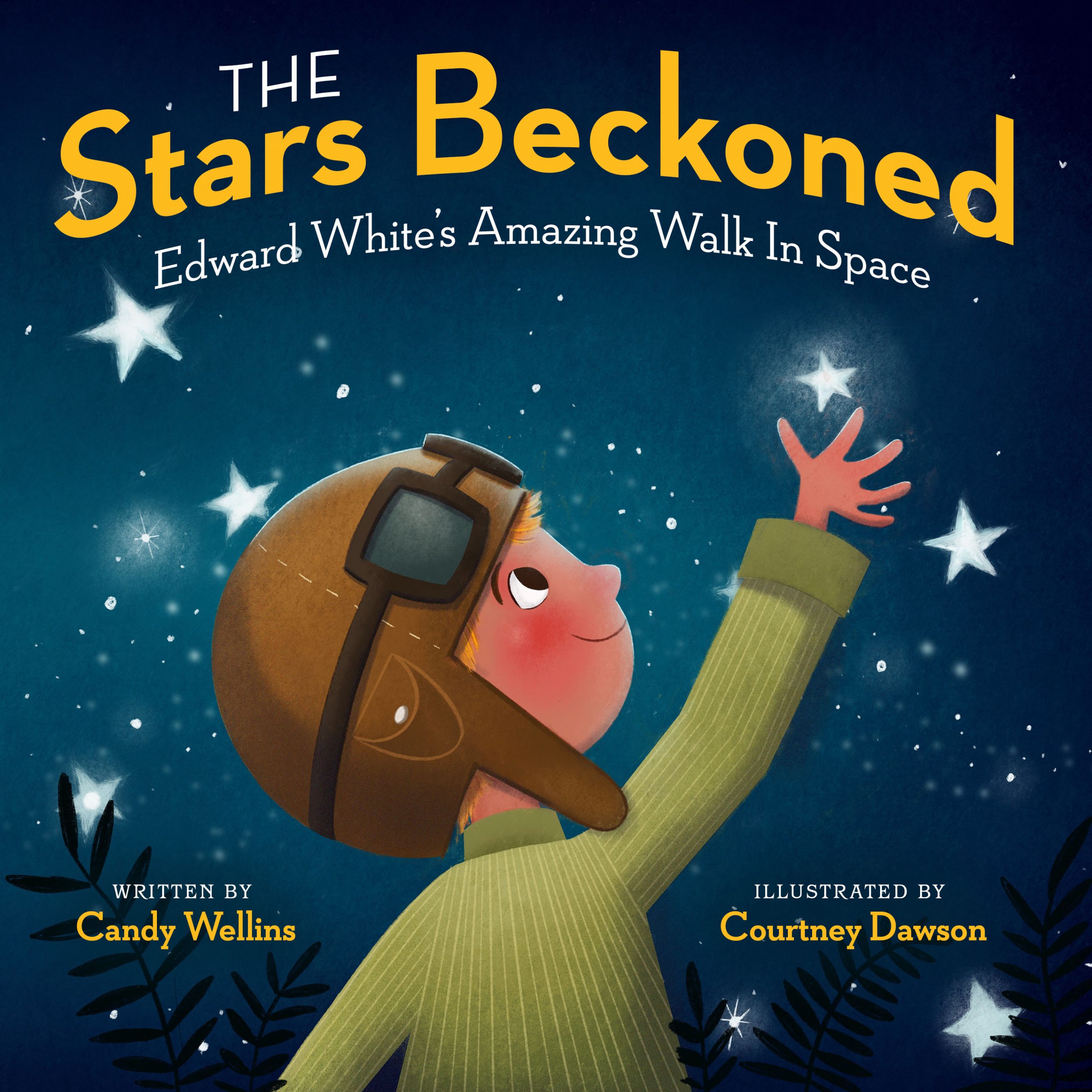 AN INTERVIEW WITH AUTHOR CANDY WELLINS

ABOUT HER PICTURE BOOK 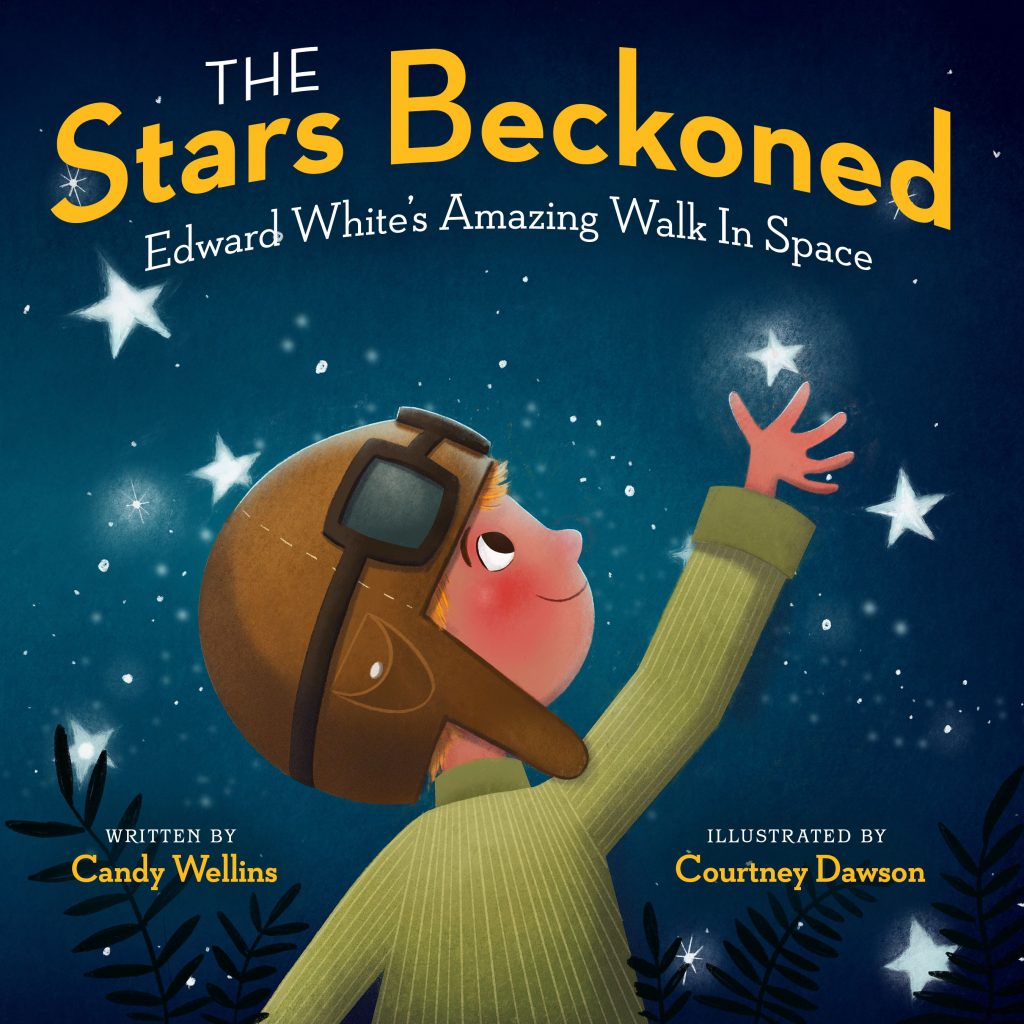 The Stars Beckoned: Edward White’s Amazing Walk In Space, written by Candy Wellins and illustrated by Courtney Dawson, is a lyrical picture book biography of Edward White, the first American to walk in space, and an ode to the beauty and wonder of the stars that brought him there.

Colleen Paeff: Hi Candy! Congratulations on the release of your second picture book, The Stars Beckoned: Edward White’s Amazing Walk In Space (illustrated by Courtney Dawson)! You’ve said that when you started writing this book you weren’t really a space buff. Do you think that helped or hindered you during the research process?

Candy Wellins: I hope it helped!  Most of what I knew about the history of NASA came from THE RIGHT STUFF, which does a good job of covering Project Mercury and I think everyone has a basic understanding of Apollo, but the Gemini missions are kind of like the forgotten middle children of the NASA missions. Not the first ones and not the flashy ones, but certainly important ones. I read the transcript of the entire Gemini IV mission–pages and pages of technical jargon—but once you get to the heart of the mission and “hearing” the astronauts speak, it’s pretty riveting.

CP: Would you consider yourself a space buff now?

CW: No, not a space buff by any means. Maybe an above-average space enthusiast at best! 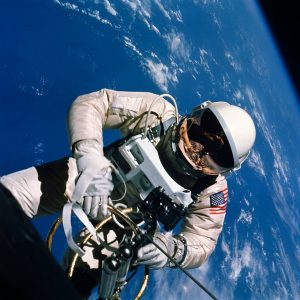 CW: I knew I wanted to tell Edward’s story for a while and I didn’t have a plan whatsoever. I only wrote in prose at that point and I tried a few things, but didn’t like them at all. A writer in my critique group shared a biography written in verse that I thought was just lovely. It made me want to do something biographical in verse just to try it.  Edward came to mind immediately. I had done a lot of the preliminary research and, honestly, if you’re going to get your feet wet in rhyme, might as well do it with someone who has a very rhymable last name like White. The opening lines came to me pretty quickly and I just let the story take me where it needed to go.

CP: Edward White’s children gave you feedback as you worked on the story, right? How did you get in touch with them and were they immediately open to you writing about their dad?

CW: During one of my many Google searches of Edward’s name, I found a post his granddaughter made celebrating the fiftieth anniversary of his spacewalk. She is a realtor so I was able to find contact information easily and reached out to her. She put me in touch with her dad and aunt and I shared the manuscript with them. It was important to me that the book be as historically accurate as possible. They were especially helpful as we moved into the illustration phase–getting hair colors, clothing choices and airplane models exactly as they were was important to all of us. Most Americans know the names of other “first” astronauts like Alan Shepard, Neil Armstrong and Sally Ride, but I feel—and I think his children would agree—Edward has been somewhat forgotten by history. I hope my book can change that just a bit because he really was amazing and did important work.

CP: You’ve said you always wanted to be a writer but you didn’t get serious about it until about 2016. What happened in 2016 that sparked the desire to get serious about writing? And why did you choose to write for kids?

CW: Writing children’s books always felt like my fantasy job—like some people dream about being an NFL quarterback or rock star—it never felt like something I could actually do. In 2016, I met a neighbor who revealed she wrote children’s books for a living. I was inspired by her journey and decided to pursue it for real. I was lucky because I live near Austin, Texas, home to the Writing Barn, which is a fabulous haven for aspiring (and continuing) writers. I took some introductory classes on picture books and the rest is history.

CP: Your background in journalism and in teaching elementary school, seems like the ideal combination for a children’s book writer—especially nonfiction. What extra skills have you developed that didn’t necessarily come from journalism or teaching?

CW:  I don’t know if it’s a skill necessarily, but I’d say I’ve developed some thick skin being a writer. This is truly a business of perseverance. It’s a highly competitive field—there are only so many opportunities for publication and tons of great manuscripts. Therefore, there are certainly more rejections than acceptances. Resilience is important.  You have to write because you love it and success will find you if you are patient.

CP: Yes! I totally agree. I know you have a trusted critique group of your peers, but I hear you read your work to your three kids for their feedback, too. Are they tough critics or do they love everything you write?

CW: Yes, my kids are 10, 8 and 2 and I do read things to them to get a child’s take on my stories. My oldest gives pretty good, constructive feedback and has a good ear for meter, too. My middle loves humor and will push me to really find the kid appeal. My youngest is just figuring out what I do. We read The Stars Beckoned together and she was pleasantly surprised to find her “mommy’s picture” on the back jacket.

CP: Your debut picture book Saturdays are for Stella came out smack in the middle of the pandemic and now your second book is coming out at what is (hopefully!) the tail end of it. I imagine that’s been tough. Did you learn any lessons from your first pandemic launch that you expect you’ll continue to use for this next book and maybe even beyond?

CW: I don’t know what a non-COVID launch looks like so I have nothing to compare it to. I will say it’s been nice because I’ve been able to visit bookstores and libraries which I probably would have not been able to visit in person. I did World Read Aloud Day this year and presented at schools in something like eight different states in less than six hours. I could never travel that much in a day! Recently I saw that STELLA was read as story time at the Met Museum in New York City. I was able to watch the YouTube video of it and would have totally missed it had we not been living in such a virtual-friendly world.

CP: Saturdays with Stella was such a beautiful tribute to grandmothers. I know you lost both of your grandmothers when you were pregnant with your first child. Given that so many of us have lost loved ones this past year, can you talk a bit about some of the things you do to connect your kids with the memories of your grandmothers, even though they never had the chance to meet them?

CW: The timing on that book was so serendipitous. I’ve had so many people reach out and tell me how much they appreciated the book, especially given the times we are living in.

Everyone is experiencing loss right now, even if it isn’t death and I’m glad the book can help with that.

I’m also a big memory keeper. We have photos of family, alive and gone, throughout the house and in accessible photo albums.  And we talk a lot about family. We share memories and connections—play the same games and bake the same recipes—I have from my grandmas.

CP: What’s next for you?

CW: You’ve probably been wondering when someone is FINALLY going to write a picture book about the world’s largest species of burrowing clams.  I can tell you the long wait is nearly over. My next book is a young graphic novel about a geoduck—look up a photo, you won’t be disappointed. It’ll be out in 2023 or 24.

Candy Wellins is a lifelong writer and book lover.  A former elementary school teacher, Candy has a BA in journalism and an M.Ed. in literacy education.  She’s now a full-time mom to three wonderful children who keep her up-to-date and immersed in kid’s literature.  When she’s not reading, writing or mothering, Candy loves running, traveling and naps! Her debut picture book Saturdays Are For Stella (Illustrated by Charlie Eve Ryan, PAGE STREET KIDS) was named a Kirkus Best Picture Book of 2020.  Her debut picture book biography The Stars Beckoned: Edward White’s Amazing Walk in Space (Illustrated by Courtney Dawson, PHILOMEL) comes out April 20, 2021.  Candy and her family make their home in Central Texas.

Research & Nesting: Bringing Books and Babies into the World by Candy Wellins

Colleen Paeff is the author of The Great Stink: How Joseph Bazalgette Solved London’s Poop Pollution Problem, illustrated by Nancy Carpenter (available August 31, 2021 from Margaret K. McElderry Books) and Rainbow Truck, co-authored with Hina Abidi and illustrated by Saffa Khan (available in the spring of 2023 from Chronicle Books).  Click here for more info.

Read another interview by Colleen here.