AN INTERVIEW WITH JULIE ROWAN-ZOCH

ABOUT HER DEBUT AUTHOR-ILLUSTRATOR PICTURE BOOK 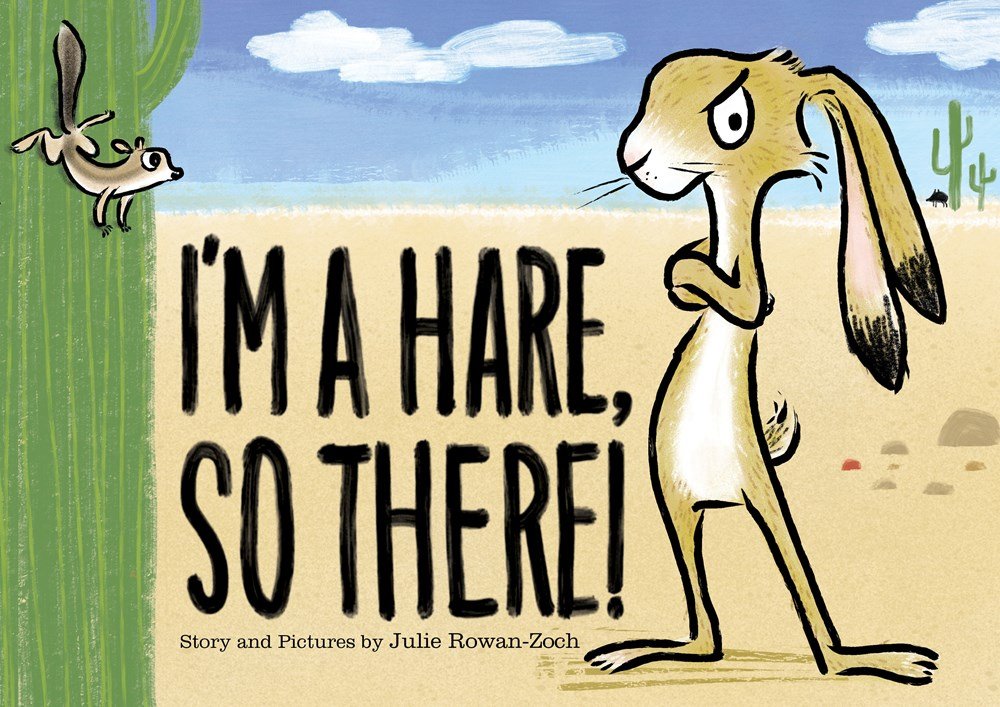 When a chipmunk mistakes Hare for a rabbit, Hare puts him in his place. But actually, the chipmunk is a SQUIRREL. Or so he says.

Colleen Paeff: Hi Julie! Congratulations on the release of your author/illustrator debut, I’m a Hare, So There! The rabbit—I mean, hare—in this story has such a strong voice. (I love it!) Was that voice there from the get-go or did it develop over time?

Julie Rowan Zoch: From the beginning, there was never any question about Jack’s personality, but recently I realized he has the same confidence as a close friend of mine. Must be why it felt so easy to write.

CP: I love the search-and-find element at the back of the book. Was that always part of the plan, or did that idea come later?

JRZ: No, it was my editor, Kate O’Sullivan who suggested I added backmatter even before the contract was final. I wanted to keep it simple and we agreed visual elements with a few facts would be a good fit. The search-and-find was an extension of that idea.

CP: Can you talk a little about the process of writing and illustrating this book? Were there any big changes?

JRZ: A big change in the ending happened before we submitted it as I had the plan to have the main character “carried off”! Luckily I was able to keep it kid-friendly AND still funny! Once it was with the editor she suggested some minor changes to the text and to add more similar-not-same elements, which I’m really grateful for – makes for a much better book. The art director, Celeste Knudsen also suggested a more colorful palette than I had originally intended, and I am grateful for that guidance too!

CP: Your debut picture book, Louis, was written by best-selling author/illustrator Tom Lichtenheld. How did you feel about creating illustrations for such a well-known illustrator? Did he have any say in what the illustrations looked like?

JRZ: I was intimidated by the thought that the illustrations would be compared to his own, and luckily I quickly got over that! Just had to remind myself, anyone’s illustration style will always be compared to others! He did have a say, but that went through the editor, and she never gave me the feeling I had to adjust my own vision if I felt strongly about something. The HMH team was truly a joy to work with!

CP: What relationships (with individuals or groups) have been most helpful to you as you’ve made your way in children’s publishing?

JRZ: Being a part of my regional SCBWI chapter and our local Connect group, (which I now facilitate) have helped me tremendously, especially with encouragement. I am also a 12×12 Picture Book Challenge member from the beginning, and some of the community I have met are very close friends now. Through both of these organizations, I have also found all of my critique partners, past and present, as well as the promotional groups I now enjoy being a part of – all of which have helped me through both book debuts happening during the pandemic! I do not want to imagine what it would have been like without them! I am also lucky to be able to trust my agent, Marcia Wernick, implicitly. She knows when to push and when to listen, shares a love of period drama, and has a great laugh!

CP: Has failure played any part in your success? How?

JRZ: Of course! No one learns without friction! I’ve racked up plenty of embarrassing moments in sharing awful manuscripts, first with my poor friends then with critique partners! And my agent can be very frank with me – thank goodness! I’ve had some tough art school teachers whose constructive criticism knocked the wind out of me as well as helped me get back up! Even the old neighborhood kids kept everyone’s ego in check – once they even left me hanging on a fence by my overalls! I suppose it’s all helped me grow a thick skin!

CP: You’re a bookseller! How does that inform your work as an author and illustrator?

JRZ: I applied for the job thinking it would be interesting, and I was right! I see many books before they are released, so I am very aware of market trends; I hear what customers of different ages are asking for in children’s literature, and know that half of what sells are classics, and I learn that even books I like can be quite boring to a group of toddlers!

CP: If I asked you to curate a perfect day, guaranteed to get the creative juices flowing, what would it look like?

JRZ: My gut reaction is to say I wouldn’t want to! I don’t know how it all works when it works, and randomness may be the key! BUT when all else fails … read poetry and read it out loud!

CP: What’s your advice to people (of all ages) who like drawing, but get discouraged by their lack of natural drawing ability?

JRZ: If you love it, draw. I really don’t know if anyone has natural drawing ability. But I do know one gains the ability by drawing.

CP: Is there anything else I should have asked?

JRZ: Have beliefs about how I wanted to make picture books changed since I started out (later in life to boot!)?

JRZ: Yes. I was quite certain I would not want to illustrate for someone else’s text, and now I know it’s just as exciting and in some ways even more so!

CP: What’s next for you?

JRZ: Fingers crossed that a current offer to illustrate moves to contract, and that a dummy I’ve been revisiting on and off for years is finally ready to go walkabout!

Author, illustrator, bookseller, and activist: Julie Rowan-Zoch grew up collecting freckles and chasing hermit crabs in NY, and spent years slicing rich breads in Germany before waking up to 300 days of blue Colorado skies. If she doesn’t answer the door, look in the garden!

For signed books, please leave a personalization request in the online order/comment section with my local indie bookstore (and place of employment!) here.

Colleen Paeff is the author of The Great Stink: How Joseph Bazalgette Solved London’s Poop Pollution Problem, illustrated by Nancy Carpenter (available August 31, 2021 from Margaret K. McElderry Books) and Rainbow Truck, co-authored with Hina Abidi and illustrated by Saffa Khan (available in the spring of 2023 from Chronicle Books).  Click here for more info.