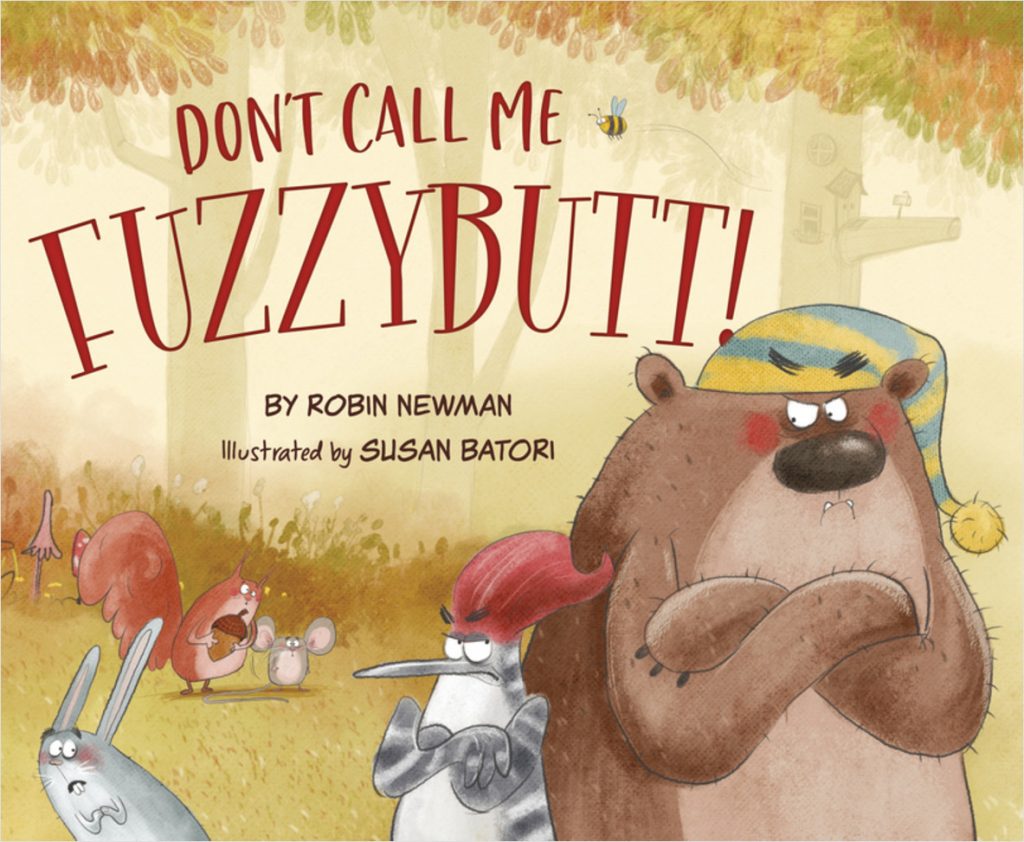 If I enjoy saying this book’s title, kids will definitely delight in repeating Don’t Call Me Fuzzybutt! They’ll be eager to read the entire book because, sticks and stones aside, what child hasn’t had a run-in with name-calling? And when you’ve got the talented team of Robin Newman and Susan Batori taking on the topic, it promises to be entertaining while making an important point.

Neither Bear nor Woodpecker means to hurl names at one another or hurt each other’s feelings, but sometimes it happens from pent-up frustration. This time it happens when Bear is settling down to hibernate for winter. Because he’s a very light sleeper, Bear makes preparations to assure he is not disturbed. Unfortunately, the tree he has cut down to make a solid door for his den was the location of Woodpecker’s homes.

Woodpecker asks Rabbit, Mouse, and Squirrel if they’ve witnessed the chopping incident. No luck. Fortunately, his own detective skills lead him to discover that Bear is the culprit so he begins to peck, peck away at Bear’s door. Angered by the commotion, Bear asks the three other animals “Who’s the pesky FEATHERBUTT making that noise?” When Woodpecker gets wind of the name-calling, he confronts Bear. While he doesn’t deny it, Bear is more concerned about getting his shut-eye and leaves for his den, further exacerbating the situation.

Soon after, Woodpecker wakes up Bear to tell him how upset he feels at being called a name in front of everyone. Tension builds beautifully both in Newman’s prose and Batori’s art. Bear is annoyed at having his sleep interrupted and Woodpecker is mad at his houses being destroyed. Now it’s Bear’s turn to get called a name and you can just guess what that is, right? FUZZYBUTT! Once again the meddlesome forest friends have inserted themselves into the drama by blabbing about the big scene they witnessed. Bear, bothered big time, stomps off to bed seething before tears start falling.

Now it’s Woodpecker’s turn to make amends and he does so by apologizing to Bear. With newfound respect for one another, the pair concoct a housing plan that is sure to make them both happy, but from a distance! Plus Bear can hibernate knowing that in 243 1/2 days he’ll have a new friend to hang out with.

Batori’s digital artwork, mimicking “colored pencils and watercolor,” makes an already appealing story irresistible. Her characters are charming, her color palette is rich and woodsy and her composition pulls us in immediately. The art, together with Newman’s humorous and skilled writing, offers a totally relatable read-aloud for parents, caregivers, teachers, and librarians that will spark meaningful conversation about conflict resolution, gossip, and the hurt caused by name-calling. I’m happy Bear and Woodpecker worked things out and kids will be, too! Just be prepared to hear FUZZYBUTT a lot more frequently in your home after reading this fabulously funny picture book.

Read a review of another book by Robin here.