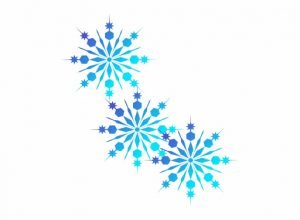 We may be fast approaching spring but many parts of the country are still getting snow so we thought we’d share five picture books to read on a snowy day. 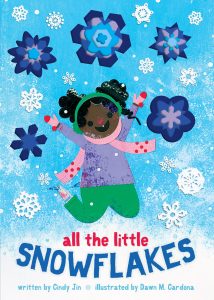 This 18-page, die-cut board book for little ones invites readers to explore all the lovely cut-outs of snowflakes while learning about their magic effect on all who see them. Children will see all the different places snowflakes fall in a rhyming text that highlights the word snowflakes to help with word recognition. The exuberant illustrations are achieved by hand-cutting, something parents can try with kids. Every joyful scene as snow falls all around is colorful and will motivate kids to go outside to play. – Reviewed by Ronna Mandel 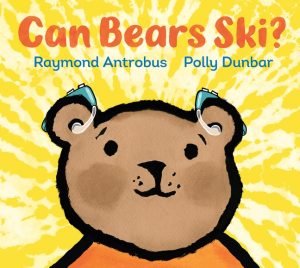 Award-winning deaf poet Raymond Antrobus, and partially deaf author-illustrator Polly Dunbar, tell a story with feeling and emotions that only those who have lived a non-hearing life could tell in Can Bears Ski? Antrobus’s picture book debut takes the reader into the life of Bear who awakens in the morning by shakes on the banister, and stairs flinching, but not quite sure what Dad Bear is saying. The young bear is confused with everyone’s question of “Can Bears Ski?” Is that what all the bears are asking? The sweet drawings of Bear’s confused face as Dad Bear speaks are heartwarmingly touching. Turning the page, Bear is surrounded by all the young bears in school who are laughing but our main character doesn’t know why. What a wonderful read for children going through their own difficulties with deafness. The excitement is palpable when Bear receives hearing aids, and we see the happiness on his little brown face. Antrobus wrote a book that he said he could have used as a child. I love the strong connection of this father/son duo and the happiness the bear feels when he realizes that Bears CAN Ski! – Reviewed by Ronda Einbinder 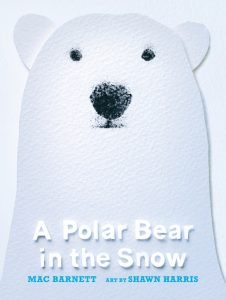 Acclaimed author Mac Barnett, winner of the Caldecott Honor and Boston Globe-Horn Book Award for Extra Yarn sends a polar bear on a majestic adventure through snow, visiting seals and hunkering in caves, while each page turn asks where is he going? A Polar Bear in The Snow features illustrator Shawn Harris’s white torn-paper illustrations layering white-on-white hues and bursts of blue. I read the book a few times, including once to a first grader that I tutor, and with each read, I discovered new aspects of the art I hadn’t noticed before. There is excitement as the story progresses while readers ponder will the polar bear be alright as he wanders through the snow. The turquoise art that suddenly appears is truly beautiful to view when the polar bear sees his reflection in the water. That blue continues through the remainder of the story until returning to the white pages of snow. Barnett leaves a lot of room for a child’s imagination with each delightful read. – Reviewed by Ronda Einbinder 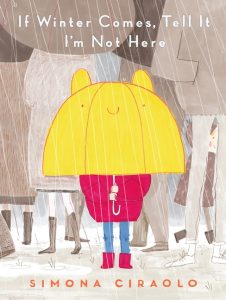 Living in Southern California, I don’t have a lot of experience with the changing of the seasons. But reading London-based author-illustrator Simona Ciraolo’s 32-page picture book If Winter Comes, Tell It I’m Not Here, showed me the relationship of a big sister and her little brother as she warns him to beware because summer won’t last forever. The expressive soft colors depicting the young main character floating in the still turquoise water invite the reader into the moment as he relishes his love for swimming. His sister warns him that summer is going to end soon, as we turn the page to the red and orange colors of the changing seasons. This is a fabulous book for both parents and teachers to share with kids who live in a place where they see the leaves fall and the cold rain turn to snow. It’s also for those of us who could eat ice cream all year and bask in the sun but sure would love to throw a snowball once in a while and cuddle with the family on the couch. The boy comes to realize that living in the moment can be an adventure no matter what time of year. – Reviewed by Ronda Einbinder 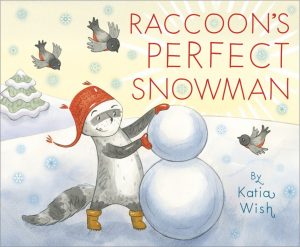 Raccoon’s qualities will resonate with many young readers and that made me really appreciate the premise of this adorable picture book. Since Raccoon has invested a lot of time perfecting his snowman-making skills he’s now offered to help his friends work on finessing theirs. The catch is that he’s so busy focusing on creating yet another perfect snowman that he neglects helping out his friends. In fact, he hogs all the good stuff needed to make one he considers just right.

Rabbit can only find dirty snow. Fox cannot master the snowball shaping and poor Mouse cannot find a single worthwhile item to use for decoration. When it’s time to check in with everyone’s progress, Raccoon is less than complimentary. He criticizes their humble efforts and offends everyone leaving him feeling “perfectly awful.” And rightly so!

When Raccoon realizes how selfish and hurtful he’s been to his pals, Raccoon convinces them to give it one more go. Unlike the first attempt, this time Raccoon’s encouragement makes all the difference. With his friends all pitching in, they create a charming snowman far from perfect by Raccoon’s original standards but perfectly wonderful just the same. This snowman has been built on forgiveness and friendship, so who really cares how it looks? What matters is that when working together, everyone’s contribution counts. Wish’s art is lovely, full of white space that works well for the wintery environment. And the forest animals’ expressive faces add to the reading enjoyment.
– Reviewed by Ronna Mandel