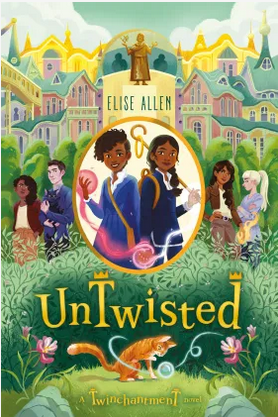 In book one, Twinchantment, identical twins Flissa and Sara must act as one person (Princess Flissara) to escape the Kingdom of Kaloon’s Magic Eradication Act which cites twinhood as reason for removal and re-homing. Book two, UnTwisted by Elise Allen, picks up on Ascension Day as the girls officially take their individual places in line for the throne. However, the new Magical Unification Act hasn’t been a simple fix for harmonious living. A top priority in the Kaloonification was bringing together the Mages, Genpos (people without magic from the general population), and Magical Animals at a school called the Maldevon Academy. However, cooperation between the groups is easier said than done, and someone is out to destroy the unity.

Favorite characters of mine from book one continue in UnTwisted: Galric and his adorable black kitten Nitpick, evil lioness Raya, and Loriah—who I’m happy to see has a bigger role. New characters like Zinka enliven the story. Plot misdirection keeps the twins searching for who’s behind the escalating ripples of unrest while they also navigate newfound friendships and how to fit in at school.

Chapters once again alternate viewpoints between Flissa and Sara. Allen successfully extends character development across both books. In UnTwisted, the girls’ individualities take center stage and their sisterly bond fractures. I like how the books show Kaloon progressing from the Magic Eradication Act to the Magical Unification Act, and the problems of both all-or-nothing edicts.

This series will appeal to kids who like books about adventure, magic, and relationships. The delightful Twinchantment novels combine high-stakes action with relatable, dimensional tween issues. It feels there’s more to come from these dynamic twins.