YOU DON’T WANT A DRAGON! 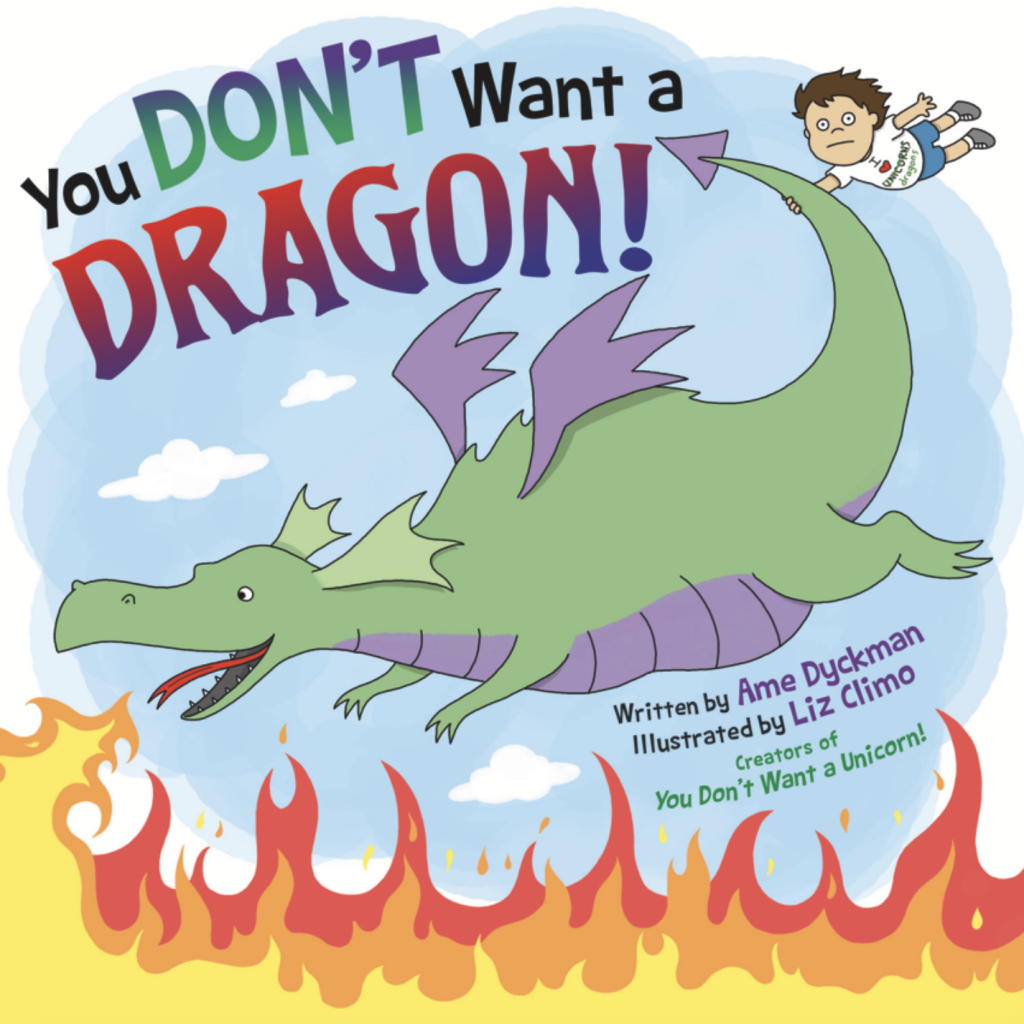 You Don’t Want a Dragon!, written by Ame Dyckman and illustrated by Liz Climo, is a follow-up to You Don’t Want a Unicorn!, which I haven’t been able to get my hands on during the pandemic. However, as an Ame Dyckman fan, I feel confident recommending both. You Don’t Want a Dragon! is a conversation between the narrator and a child who has just successfully wished for a dragon. And even if you haven’t read the first book, it is quickly clear that this same kid previously wished for a unicorn, and it didn’t go so well. Apparently, the unicorn multiplied until there were many glittery, colorful copies (who make cameo appearances in this book). There also may have been some unicorn poop, which seems to be cupcakes! Now the kid has wished an adorable dragon into his life.

Dyckman’s books are always fun to read aloud. I called the book a “conversation,” but in fact, the youngster in the book doesn’t say anything. Using second person, the narrator addresses, and engages, the main character: “NOW you’ve done it! I TOLD YOU not to wish for a dragon!,” while the boy in the illustrations answers with action. He plays with his new pet through several happy spreads until the dragon starts behaving like a troublesome canine. The narrator warns that he’s also becoming “GINORMOUS … You just don’t have the space for a dragon. In your heart, yes. But in your house … no.”

Climo is a comic artist for The Simpsons and also wrote and illustrated several books before collaborating with Dyckman on You Don’t Want a Unicorn! and You Don’t Want a Dragon!. The kid’s world is drawn in thin outlines filled with gentle colors; the dragon is a soft green with a purple tummy and wings. And don’t forget to note the child’s t-shirt in the cover art. While the illustrations show their kinship with The Simpsons, they are more comfortable than wacky, reminiscent of the Clifford the Big Red Dog books but with more attention to detail and scale.

I expected to enjoy this book and was not disappointed. There’s lots of Dyckman’s trademark humor, and it fits so well with Climo’s art. For example, Dyckman writes that stories about dragons “never mention … WHERE charcoal comes from. DON’T mention this at your next barbeque.” Climo’s drawing? The dragon sports a toilet-paper-roll bracelet and a proud grin while the kid, wide-eyed, stands next to a grill with flaming briquettes piled high.

Eventually, the narrator convinces the kid to wish the dragon away. Kids aren’t meant to have magical creatures for pets. “It’s for the best.” You might wonder what the kid will wish for next, except there’s a twist: he finds a completely ordinary pet.