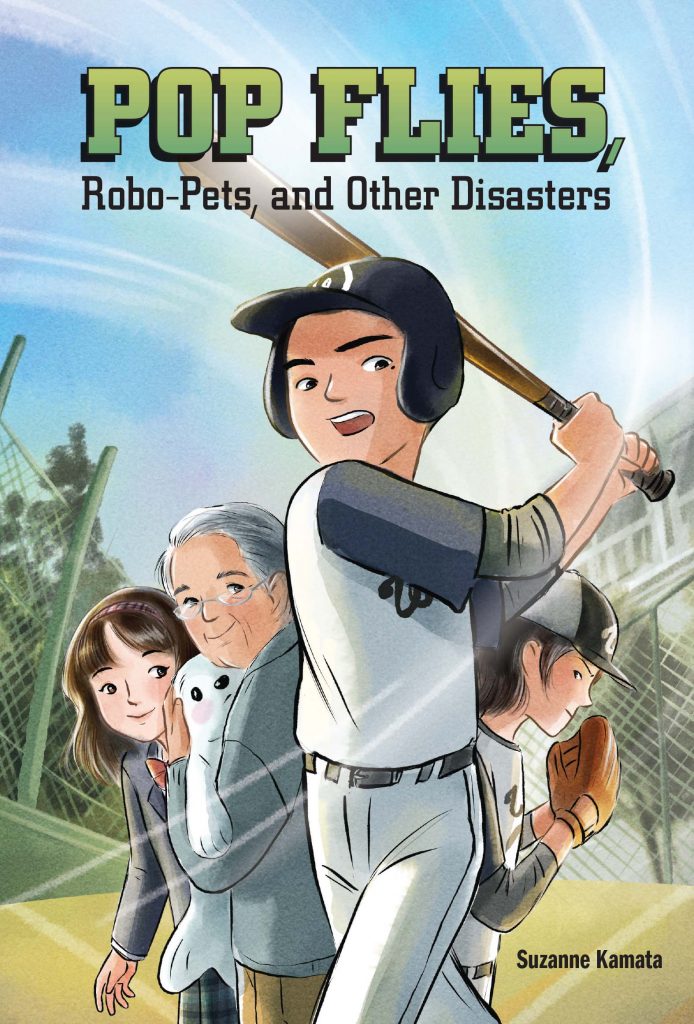 POP FLIES, ROBO-PETS, AND OTHER DISASTERS

The release of this fast-paced and interesting middle grade novel was scheduled around Major League Baseball’s Opening Day events. We all know that’s been delayed due to the pandemic, but there’s no reason kids cannot enjoy the thrill of baseball season between the pages of an engaging novel. Pop Flies, Robo-Pets, and Other Disasters offers readers just that with its insider’s perspective on the sport along with the ups and downs of being on a team. But that’s only part of the story as the title hints. It’s a diverse novel set in Japan that addresses repatriation, dementia, special needs, and bullying. Read below to find out more. Also a pdf of discussion questions is available here.

Thirteen-year-old Satoshi Matsumoto spent the last three years living in Atlanta where he was the star of his middle-school baseball team—a slugger with pro potential, according to his coach. Now that his father’s work in the US has come to an end, he’s moved back to his hometown in rural Japan. Living abroad has changed him, and now his old friends in Japan are suspicious of his new foreign ways. Even worse, his childhood foe Shintaro, whose dad has ties to gangsters, is in his homeroom. After he joins his new school’s baseball team, Satoshi has a chance to be a hero until he makes a major-league error.

GOOD READS WITH RONNA: When did the idea hit you to write a middle grade novel about a school baseball team set in Japan?

SUZANNE KAMATA: Hmmm. I did write a picture book baseball story, which was published in 2009, at my son’s request. Around that time, I started writing an adult novel based on my husband’s experience as a Japanese high school baseball coach. Originally, Satoshi was a character in that novel. Later, maybe about ten years ago, a friend suggested that I write a YA novel about Koshien, the extremely popular Japanese national high school baseball tournament. I took Satoshi out of my adult novel and tried to write a YA novel about him. Even later, readers suggested that it seemed more like a middle grade novel, so I made adjustments. That’s the long answer. I guess the short answer would be that I never set out to write a middle grade novel about a school baseball team in Japan.

GRWR: Let’s talk first about the pop flies portion of your novel’s title. With Major League Baseball put on hold due to the Corona Virus, readers get to vicariously experience the sport in your book. Have you been a baseball mom and, because you write about it so convincingly, do you enjoy baseball?

SK: I do enjoy baseball. My husband was a high school baseball coach for 12 years, and I used to go to his games. So, first, I was a baseball wife. My son played baseball from elementary school throughout high school, and I also taught at a couple of high schools in Japan that were known for their strong baseball teams. I feel like I know a lot about high school baseball in Japan, but I often checked with my husband and son about the details. I read an early draft to my son, and he corrected a few things.

GRWR: Upon his return to his old school, Tokushima Whirlpool Junior High, a private school founded by his grandfather, the main character Satoshi Matsumoto’s old friends and classmates “are suspicious of his new foreign ways.” I love how your book honestly explores the struggles of this thirteen-year-old’s readjustment upon returning to rural Japan after three years living in Atlanta. Can you speak to the pros and cons of the international experience to help readers understand his mixed emotions and the changes that occur in people after a move abroad.?

SK: Personally, I feel that there are no cons to having lived or traveled abroad. I am sure that many kids in Japan don’t feel that way now, but when they grow up they will understand the value of these experiences. For my own children, having a foreign mom and growing up with additional cultural elements (like the tooth fairy, and macaroni and cheese, and speaking English at home) set them apart and perhaps made them feel a bit lonely at times. This was especially true since we lived in a small town in a conservative, somewhat remote part of Japan. However, I wanted them  to understand that there was a world beyond the one that they lived in, that even though they were in the minority in the town where we lived, they had a tribe out there somewhere. When you live abroad, you start to look at your own country differently. You can see things that people who have never left cannot. I think, in many ways, you begin to appreciate your own country and culture more. In the book, Satoshi goes through the same thing.

GRWR: The novel’s supporting characters include Satoshi’s grandfather (Oji-chan) who now has dementia and once had a chance for a promising career in baseball before WWII, and younger sister, Momoko , age four, who has cerebral palsy and uses sign language to communicate and leg-braces or a wheelchair for mobility. Are they based on actual people in your life and how are special needs and disabilities treated in Japan?

SK: Yes and no. For many years, we lived with an elderly relative who showed signs of dementia, and my daughter is multiply disabled. She is deaf and has cerebral palsy, and, yes, she has leg braces, uses a wheelchair, and communicates mostly via sign language. But these characters are fictional.

As in the book, children with special needs and disabilities are not usually mainstreamed. There are separate schools for children who are deaf, blind, or who have intellectual or physical disabilities. For the record, my two children, who are twins, went to two different schools.

Children with disabilities, or some other difference, are sometimes bullied.

While accessibility is gradually improving, there is still a degree of shame in Japan surrounding mental health issues and disability. To be honest, certain members of my Japanese family don’t approve of my writing about disability so openly, even though I am writing fiction. However, I think it’s important to do so.

GRWR: A bully named Shintaro plays a prominent role in this story. He bullied Satoshi before his move abroad, and the fact that his dad has ties to gangsters makes him all the more scary. He picks on both Misa, a new student who is biracial and Satoshi, sometimes quite aggressively. Is bullying common in Japanese culture and how does the approach to dealing with bullying in school differ in Japan than in the U.S.?

SK: Bullying is a persistent problem in Japan. Typically, teachers try not to intervene, with the thinking that kids should try to work things out by themselves. Japanese schools have classes in morality, where they might discuss bullying, but most schools don’t have counselors, and some classes have up to 40 students, which is a lot for one teacher to manage.

GRWR: There’s a crucial part of the story where Satoshi’s ego is on full display when he chooses to ignore instructions from his coach. I was surprised by this display of disobedience, especially given all the examples of students being raised to be very respectful. Do you think there are too many rules in a Japanese student’s life and that’s why Satoshi preferred his life in America? Here is good spot to ask you to speak to any cultural differences about being a team player in the US and in Japan.

SK: Independence is valued more in the United States, whereas conformity is valued more in Japan. As a teacher, I have come into contact with many students who have gone abroad for a year or more. They are different when they come back. Generally, they enjoy the sense of freedom and self-expression that they experienced in the U.S. Satoshi enjoyed the more relaxed atmosphere of American school, and he finds it hard to buckle down. Also, in Japan, it’s not good to stand out. It’s better to be humble and to give credit to your teammates than to draw attention to your abilities.

GRWR: Satoshi’s grandfather has a therapeutic robo-pet seal known as Nana-chan. Where did this unusual idea come from because it’s sweet, funny and a plot driver as well?

SK: I first read about these therapeutic robo-pet seals in a Japanese textbook, and then I later saw one in person at a science exhibition. I was immediately charmed – a seal! How random! —  and I wanted to put it into a story.

GRWR: I like that there are illustrations included by Tracy Bishop in every chapter although I only saw an ARC and am not sure if there were any changes made before publication. Did you always picture the novel with illustrations?

SK: No. Actually, I didn’t expect that the novel would be illustrated, but I love having my work illustrated, so I was very excited about it. I am glad that the illustrator is Japanese-American, and that she was familiar with what I wrote about. I was very happy with the final result.

GRWR: What advice can you offer to readers who may have international students at their schools here in America?

SK: As they say, “variety is the spice of life.” Make an effort to get to know people who are different from yourself. Be patient with students from other cultures when they make “mistakes” or do something differently from you. You can learn so much from people from other countries.

I would also encourage students to read books, such as mine, about kids in other countries and from other cultures. There’s nothing like a book to build empathy.

GRWR: Is there anything else you’d like to mention?

SK: If readers enjoy this book, perhaps they would be interested to know that I have written two other novels that  have a connection to Japan, and are appropriate for middle grade readers – Gadget Girl: The Art of Being Invisible and Indigo Girl. Both feature Aiko Cassidy, a biracial girl with cerebral palsy who aspires to be a manga artist.

Thanks for the opportunity to talk about my writing!

Award-winning author Suzanne Kamata was born and raised in the United States, but has lived in Japan for over half of her life. Suzanne raised two kids and now lives with her husband in Aizumi, Japan.

Thank you so much, Suzanne, for your honest, enlightening replies. I loved learning about your experience as an ex-pat living and raising a family in Japan and how it’s informed your writing. I hope readers will get a copy of Pop Flies, Robo-Pets, and Other Disasters to find out all the things Satoshi dealt with upon his return to Japan. Good luck on your works-in-progress (an adult novel and several picture books), too.

MIDDLE-GRADE FANTASY NOVELS ∼ A ROUNDUP ∼     THE GHOST OF MIDNIGHT LAKE…