A ROUNDUP OF PICTURE BOOKS 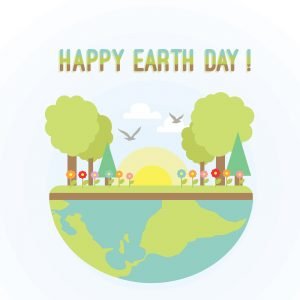 Wednesday, April 22, is the 50th Anniversary of Earth Day which will be celebrated around the globe. Read below about some new picture books, both fiction and nonfiction, that Christine Van Zandt recommends to help your children understand the significance of this holiday. 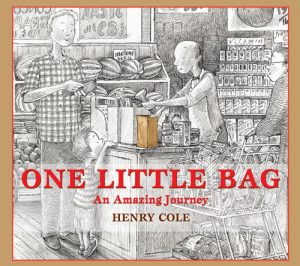 One of my favorite things about Henry Cole’s gorgeous, wordless picture book, One Little Bag: An Amazing Journey, is the prologue. I was hooked from the first image: a forest where one tree—colored brown—stands out. Cole’s amazingly detailed black-ink drawings are juxtaposed by brown-colored items: the tree, first made into paper, becomes an unassuming lunch bag.

In the Author’s Note, Cole shares how, in 1970 for the first Earth Day, he decided to not throw out has lunch bag that day. Or the next one. Eventually, he used that bag about 700 times! Then, when he went to college, he passed the velvet-soft bag to his younger friend who used it for another year. Wow! This really hit home with me. I’m conscientious about noncompostables, but will now consider the possibilities of paper products.

Using a humble brown bag as its central element, the story follows the bag’s journey from creation to conclusion. We are emotionally engaged with the little boy as he grows to adulthood and the family members we meet along the way. This story drives home the messages that even seemingly insignificant choices matter and that kids have the power to change things. These workhorse lunch bags are relatively inexpensive and typically don’t garner a second thought. Cole’s true-life story brings this simple item to the front page of his book and the forefront of our attention. Bravo!  ★Starred Review – Kirkus Reviews 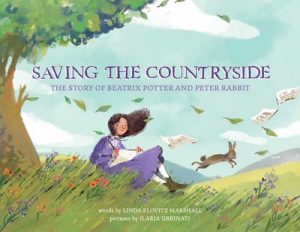 When I think of the mischievously adorable Peter Rabbit, of course his creator, Beatrix Potter, comes to mind. But, who was the woman behind this famous character? Linda Elovitz Marshall’s picture book, Saving the Countryside: The Story of Beatrix Potter and Peter Rabbit fills in the blanks.

Potter was a bright artistic girl who lived in the city but cherished the family’s summers in the country. Too soon, it was back to the constraints of being a Victorian-era girl. Focusing on her drawings, Potter, later, was able to land a job—but only because the publisher thought she was a man. Throughout the story, we see Potter pushing against and past the bonds of what a woman was “supposed to do.” While these actions were commendable, Potter also took on the role of conservationist, buying up more than 4,000 acres of beloved land to keep it peacefully undeveloped; her donation to the UK’s National Trust allowed the area’s preservation.

The illustrator, Ilaria Urbinati, enlivens Potter’s story in a muted old-fashioned style complementary to the text. Be sure to check beneath the cover for a clever second image: a before-and-after of Potter in her cherished landscape.

This behind-the-scenes look at Potter’s life will engage kids because it’s relatable and inspirational—showing you can make a career doing what you love, break through societal limits, and care for our planet. What Potter managed in her 77 years was exceptional. ★Starred Review – Foreward Reviews

THE GIRL WHO SPOKE TO THE MOON: 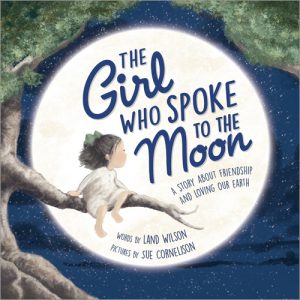 Land Wilson’s rhyming picture book, The Girl Who Spoke to the Moon: A Story About Friendship and Loving Our Planet, is a gentle story packing a powerful message. Little Sofia befriends the Moon and, one night when he’s blue, she imagines herself up there, seeing the Earth from a new perspective. The Moon sadly tells her, “With dirty waters, land, and air, it looks as though she’s in despair. Her people seem so unaware that what Earth needs is better care.”

Sue Cornelison’s soothing images are in the muted tones of a bedtime book, yet, the swoops of sparkles throughout give the story movement and feeling. Once Sofia realizes she must share her findings, we’re shown glimpses of children from around the world doing their part to help our planet.

The end matter provides explanations of how the Earth’s air, land, and water are polluted, followed by simple suggestions such as creating less trash and eating less meat. In the Author’s Note, Wilson shares how astronauts love looking back at our planet, but how that distance also brings an understanding of Earth’s vulnerability and precious importance. Wilson urges us to make the Earth’s well-being a priority: “When people work together, our power grows. But we need to work faster, harder, and smarter”—a message that should be taken to heart as we celebrate the 50th anniversary of Earth Day. I like how Wilson’s commentary is both realistic and optimistic, hopefully inciting readers to action.

Christine’s also reviewed If We Were Giants, a middle grade novel ideal for Earth Day reading.

Read an illustrator interview here for Greta and the Giants.

Click here for another recommended read for 🌎Earth Day.