LOOK BOTH WAYS: A TALE TOLD IN TEN BLOCKS 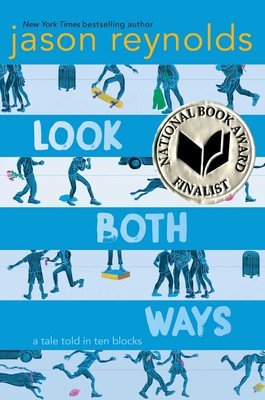 Jason Reynolds once again nails it with his unique storytelling skills. In Look Both Ways, ten vignettes cover ten blocks of a neighborhood, following what happens to kids on the same day after Latimer Middle School lets out. Stories overlap and intertwine or do their own thing. Kids are captured in their every dimension from exuberance to anxiety. Boogers, bullying, dogs, and disease—yup, it’s all there.

The most poignant story for me was about Canton, whose mother is a crossing guard at his school. One day, she instinctively rushes forward to push a toddler frozen in the path of a bus out of the way, taking a minor hit herself. A week later, she’s back on duty, but her son doesn’t recover. Mortality is a subject we wish our kids didn’t have to grapple with. Reynolds shows how this boy is traumatized by the incident. Canton feels he can keep his mother safe from harm if he’s there on time each day, watching over her as she works.

How many parents have hovered over their sleeping child for no reason other than to ensure that child’s safety? We all know if something were to happen, the odds are slim that we’d be standing there at the right time with the right response. Yet, we do it—just as Canton believes his presence will somehow safeguard his mother. Before he can fall too deeply into this abyss, the school’s custodian (recalling how a dog made his wife feel better after their daughter went off to college) makes Canton a dog from an old broom. Worrying its tattered top enables the boy to quell his panic attacks.

Throughout, Reynolds captures a child’s emotional scope succinctly and accurately. An older reader will appreciate the craft required to weave these pieces with their connections and resets, forming a cohesive narrative arc. A kid will love the book for being funny, honest, and a different kind of reading experience. No matter where you’re coming from, the book will wow.