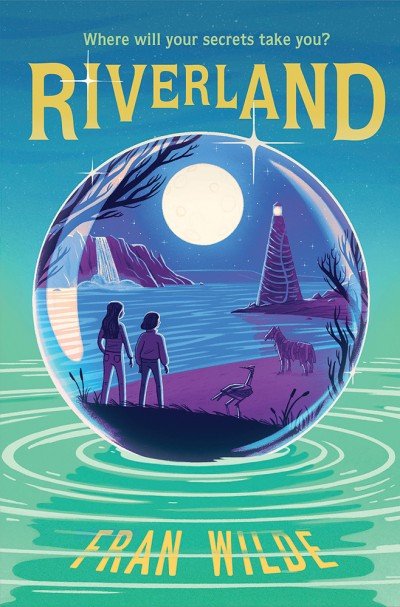 In Riverland a debut (older) middle grade novel by Fran Wilde, Momma promises everything will be all right, but sisters Eleanor and Mike know better. Things aren’t OK, no matter how hard they try to be good. The girls weave stories about how “house magic” will fix whatever’s wrong this time. When Poppa breaks the family heirloom (a glass witch ball), a river appears in their secret hiding place and the girls venture to a place where dreams grow in reeds.

A heron made of metal, glass, and driftwood explains that nightmares are made of “failed dreams, smoke, and the river mist” and that “the same magic that kept dreams and reality apart also held back the nightmares.” Anassa, a snake-headed monster, upsets the balance. As the damage in one world seeps to the next, the sisters try to understand their family’s guardian’s agreement while facing new kinds of danger and the possibility of never returning home. Sisterly love fiercely connects them, yet Eleanor worries her temper dooms her to become like Poppa.

Lines between fantasy and reality blurred long before the enchanted river. The girls and their mother live fearfully in denial, unwilling to admit Poppa’s abusive nature. Though Eleanor’s new friend Pendra and Pendra’s mom (school guidance counselor) surmise something’s wrong, Eleanor keeps up the façade and her friend at arm’s length; without confirmation others are powerless to help.

Riverland depicts children trapped in a dysfunctional home and the ways in which they escape reality. This important book shows a family’s coping mechanisms for domestic violence. Older middle graders and YA readers may be best suited to recognize and process the nuances of this story.