AWAY WITH WORDS:
The Daring Story of Isabella Bird
Written by Lori Mortensen
Illustrated by Kristy Caldwell
(Peachtree Publishing; $17.95, Ages 6-10) 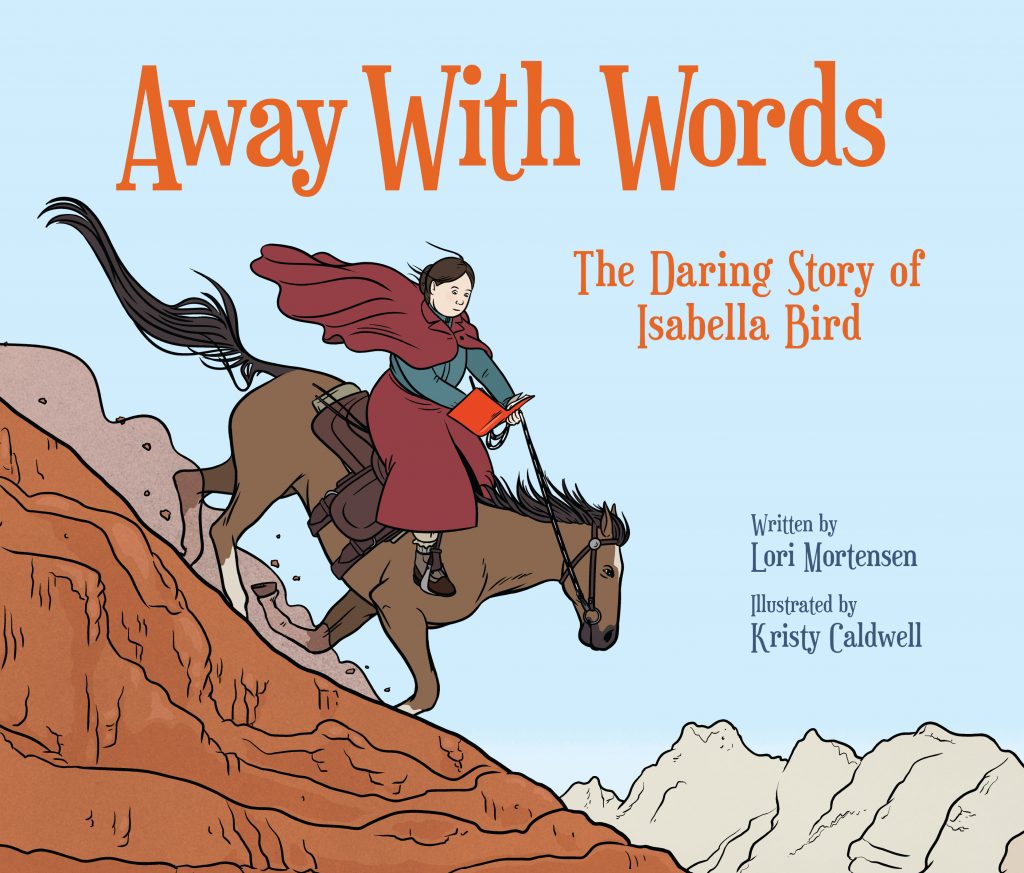 Before Nellie Bly or Amelia Earhardt there was Isabella Bird and, thanks to this eye-opening new picture book biography, Away With Words: The Daring Story of Isabella Bird, children can read about what impressive inroads this English explorer made at a time in history when a woman’s place was in the home not out globetrotting around the world, and writing about it to boot!

This “unlikely candidate for adventure,” who never felt well as a child, was born in the Yorkshire countryside in 1831. Isabella Bird suffered from a multitude of ailments and rarely left the house. That worked for awhile because, according to Victorian societal norms that she would eventually challenge, “Young ladies wore dresses. / Young ladies didn’t go to school. / Young ladies stayed home.” Countless doctors couldn’t diagnose her with anything until one doctor recommended she get some fresh air. Her father took Isabella out with him on his horse and, with his encouragement, she made discoveries that would forever change the course of her life. “Out in the wild, Isabella forgot about her aches and pains. / She breathed in new ways to see and describe everything around her.”

Captured beautifully by Caldwell’s spread below, letters from relatives abroad and other news from overseas sparked a flame in Isabella. She felt deep inside that travel would feed her soul and she yearned for the possibilities it would provide but some days she could barely get up. The tide turned for the better when her doctor suggested a sea voyage and her parents agreed.

She boarded a mail steamer for Nova Scotia and from then on there was no looking back for this intrepid young woman. Her red leather notebook accompanied her wherever she went. I love how Mortensen weaves quotations of text from Bird’s own published books wherever it adds atmosphere to the story. Caldwell’s colorful illustrations pair perfectly with those lines. One of my favorites is, “There was a small bed with a dirty buffalo-skin upon it; I took it up and swarms of living creatures fell out of it …”

Her first book, The Englishwoman in America, was published in 1856, smack in the middle of Queen Victoria’s reign. But when her father passed away Bird chose to end her explorations. That ultimately led to a flare up of her ailments and an onset of doldrums that, at her sister’s urging, could only be allayed by journeying across five continents. It took grit and guts and bravery to gallivant solo around the world to myriad destinations lacking in creature comforts, but Isabella persevered. Thanks to her detailed record keeping of all the places she visited, the nine additional books she wrote became bestsellers. People craved reading about the exotic locales and peoples that they’d never see in their lifetime whether that be climbing up Kilauea volcano in the Sandwich Islands (Hawaii), trekking across the dangerous frozen Persian “desert at the roof of the world,” or befriending a “notorious outlaw.”

As Mortensen’s story vividly demonstrates, the world was indeed Isabella’s home so it’s no surprise that in 1892, Bird was the first woman to ever be inducted into the Royal Geographical Society of London and a year later was presented to Queen Victoria. In 32 pages of lyrical prose, Mortensen shows young readers the personal growth and happiness that can come from travel and exposure to a vast range of cultures. Caldwell’s artwork includes just the right amount of soaring spirit a name like Bird implies.

Picture book biographies, when done well, provide a much needed window on the world of important people from the past that we might ordinarily never hear or read about. Away With Words: The Daring Story of Isabella Bird, does that and more. It offers inspiration and a role model for children who, long after Women’s History Month has ended, will no doubt want to seek out Bird’s impressions by turning to her original books to learn more about this trailblazer’s 19th century daring journeys. The back matter including an author’s note, a timeline of Bird’s travels and publications, Bird’s text quotations, and a bibliography make this nonfiction book ideal for both home and school. In fact, I’d give it as a gift to a child along with a journal to get them started on documenting their own travels, even if that’s just an outing to the zoo or a trip to another city.

Visit other stops below on this enlightening blog tour from Peachtree Publishing:

A MUST FOR MOTHER'S DAY! A Gift for Mama, written by Linda Ravin Lodding and…