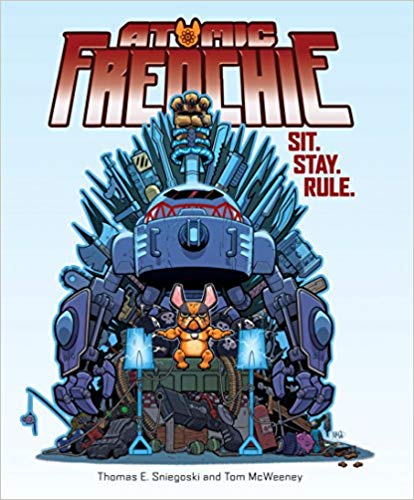 Have you noticed that French Bulldogs are everywhere these days? Perhaps they’re up to something … making the timing for Atomic Frenchie: Sit. Stay. Rule. just right. This non-stop funny middle grade mashup that is part graphic novel, is a perfect late summer read for every kid that aspires to greatness and world domination. You know one, don’t you?

Kirby is no ordinary dog. He’s a power hungry French Bulldog with big plans. He’s just waiting for his chance to escape the prison of his home and his overbearing humans. When his humans pack up the car and strap him into a car seat, Kirby’s life changes forever. At his new home, the dog discovers a secret laboratory and his dream of becoming a super villain begins to be realized. Can his dastardly schemes come to fruition or will his huge ambition be thwarted?

Atomic Frenchie: Sit. Stay. Rule. has a mad scientist with bizarre secrets, a loyal and loveable sidekick turtle, rogue robots, and a host of crazy comic book characters. It’s a fast paced adventure with a super villain that you might actually start rooting for. The best news: this is just the first book in a series so get your kids hooked today by heading to your local independent bookseller to pick up a copy.