HELLOFLO: The Guide, Period.
THE EVERYTHING PUBERTY BOOK
FOR THE MODERN GIRL
Written by Naama Bloom
Illustrated by Fleur Sciortino 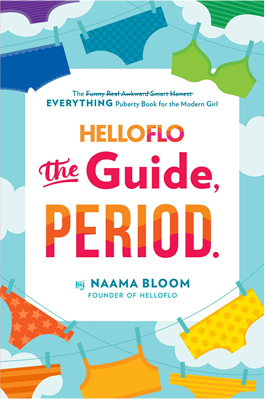 Read an excerpt from HELLOFLO: The Guide, Period.
Just scroll down for a taste of Chapter Seven
courtesy of Penguin Young Readers.
(Dutton Children’s Books; $19.99 Hardcover & $12.99 Paperback,
Ages 10 and up)

Tweens and teens will enjoy HELLOFLO founder Naama Bloom’s shame-free attitude towards all things period-related, making this an ideal read for girls entering puberty and interested in learning more about their bodies. Got questions about bras, cramps, facial hair, shaving or tampons? The answers are all in here. Bloom’s even included stories from girls and women who’ve been there and whose experiences will remind adolescents that they’re not alone. Know someone who needs this information or will need it soon? Consider sharing this post with its enlightening excerpt about changes that occur in the brain during puberty. They’ll want to read more. This honest and empowering guide, vetted by doctors, covers a variety of essential topics such as:

· BREAST CANCER AWARENESS: HELLOFLO encourage early detection practices, and emphasizes the importance of knowing your body, starting with instructions for giving breast self-examination (pages 40-41)
· STUFF WE WANT TO HEAR ABOUT: Like period-proof underwear and a recommendation for a good gynecologist, there is some information that is meant to be shared. Everyone has someone – a young girl, a grown woman, a mom, a dad, an aunt, a big sibling – who would want to hear about a modern and inclusive puberty guide.
· FOR YOUR FYI: What are fallopian tubes, again? Do periods attract sharks? When did modern shaving start? There is so much information packed into HELLOFLO’s colorful diagrams.

We’re going to talk about your brain and how it develops. This is critical information that I didn’t have until I was already a grown-up. Once I learned about this stuff, I realized how helpful it would have been to know all of this when I was still a kid. That’s why I’m sharing it with you.

What you’re about to read is an introduction, a vastly simplified overview of brain function and development to help you understand what’s happening. This is not a complete explanation; it’s really just broad strokes.

Think of your brain as your command center. In this command center there are approximately 100 billion neurons. Neurons are cells that transmit information through your brain.

Your brain, and its neurons, perform important functions and are responsible for your behavior, feelings, and judgment.

Your brain completed approximately 95 percent of its development before you were six years old. Your brain, like your body, had a major growth spurt. Right now, while you’re going through puberty, your brain is having another growth spurt, and the pathways that make connections between your actions and your brain are further developing.

Have you ever seen a plasma globe? It’s a clear glass ball with a mixture of gases and an electrical current. When you aren’t touching the outside of the globe, it looks like a bunch of small lightning bolts coming from the center. Then when you touch the outside of the globe, the bolts come together to form fewer, stronger bolts. Your brain develops much like a plasma globe. There are bolts, or neural pathways, in every direction. Then, like someone’s hand is placed on the globe, the smaller neural pathways disappear in favor of fewer, stronger neural pathways.

During puberty, it’s as if there are a few hands being placed on your plasma globe to make fewer, stronger bolts. Here’s an example. If you really love to play a musical instrument and you keep playing throughout your adolescence, those pathways will become permanent and you’ll likely keep playing that instrument, or at the very least maintain the skill, for the rest of your life. But if you stop playing and practicing during adolescence, those pathways will slowly get weaker or even disappear. The cells and connections that are used frequently will survive and flourish until they essentially become hardwired. But the paths that aren’t used are the small bolts that disappeared. These pathways don’t have to be lost forever; you can always learn new skills or re-learn those that have been lost. But your chances of hardwiring skills increase if you work on them throughout your adolescent brain growth spurt.

How the Command Center Makes Decisions

The way your brain is developing also impacts the way you make decisions.

Another great example of how to understand this distinction is to think about using helmets. When you’re a little kid you wear a helmet when you’re riding a scooter, riding your bike, or skiing, rarely challenging your parents. But when you get a little older, sometimes helmets seem less cool. Your brain hasn’t gotten stronger or more resistant to concussions if you fall. But you are making decisions for yourself and you are choosing what feels good, not necessarily what’s the safest. That’s your limbic system talking without getting feedback from your prefrontal cortex.

It’s nothing to be ashamed of. When I was a teen it wasn’t considered cool to zip up a winter coat and wear a hat. I still recall freezing outside with my friends in the winter because I was more concerned about pleasing them than I was about staying healthy. My limbic system won a lot back in those days.

As we discussed, the prefrontal cortex won’t be fully developed until you are roughly thirty years old. Yes, thirty! For many of us, that’s after we choose to begin families. Hard to imagine, right?

The prefrontal cortex is in charge of making rational decisions. When you were little you needed your grown-up to tell you not to touch the stove because it was too hot and you’d get burned. The prefrontal cortex is the part of your brain that tells you these sorts of things as you get older, so you don’t need your grown-up around all the time to make sure you don’t get hurt.

This is important so I’m saying it again:

The part of your brain that is responsible
for making rational decisions is not fully formed until you’re thirty years old.

As you get older, the decisions you’re faced with are more nuanced than whether or not you should touch a hot stove. Also, the really complicated decisions are often made with your friends who we know now impact your limbic system. That’s why this is such critical information.

An undeveloped prefrontal cortex is not a get-out-of-jail-free card. You’re still on the hook for all your actions. You remain responsible for you. However, it does mean you might have to work harder in order to make good decisions.

When you’re a grown-up all these parts work together at the same speed. When you’re going through puberty, it can sometimes feel a bit like your limbic system is in charge.

For one thing, be patient. When I said your prefrontal cortex won’t be fully developed until you’re thirty that doesn’t mean that it’s not capable of making good decisions. What that means is that it operates more slowly than the other parts of your brain. So while the emotional part of the brain is moving quickly, the prefrontal cortex is sluggish to respond.

There is one thing you can do to help you make better decisions: slow down. Give your rational brain a chance to process and catch up. Find a quiet place and really think about your decisions. You’ll be glad you did.

ABOUT THE AUTHOR: Naama Bloom is the founder of HelloFlo.com, a modern-day health site for girls and women. Her mission for HelloFlo was to create a place where women and girls could learn about their bodies in an open and honest environment without any shame and with a healthy dose of humor. She lives in Brooklyn, NY, with her husband and two children. HelloFlo:The Guide, Period. is her first book.

COOKBOOKS FOR ALL! A Roundup of Recommended Reads        …