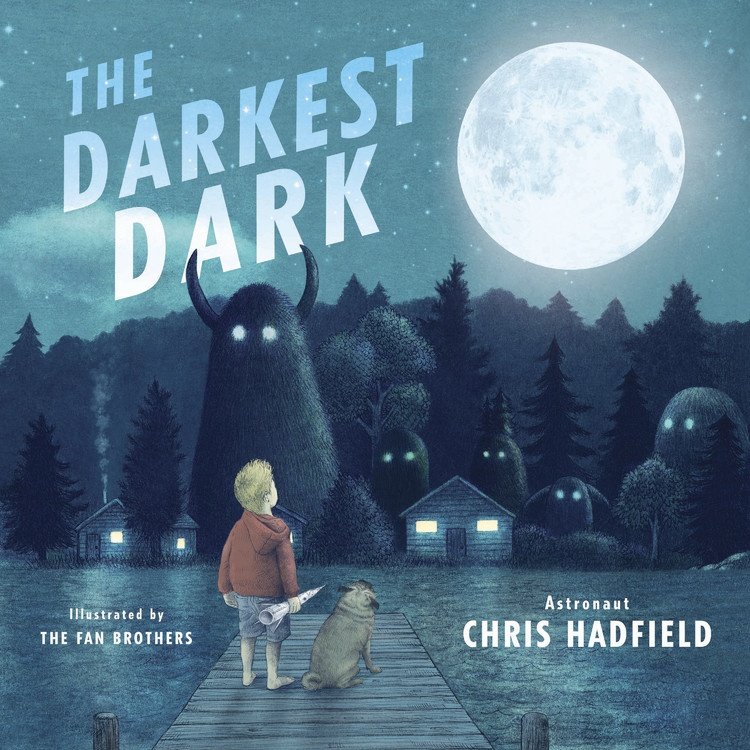 The Darkest Dark takes place on July 19, 1969—the night before Apollo 11’s Moon landing. We meet Canadian astronaut Chris Hadfield when he was a boy. Chris can’t sleep because “his room was dark. Very, very dark. The kind of dark that attracts the worst sort of aliens.” These creatures, a combination of shadow and imagination, appear on the book’s cover and throughout the story.

Young Chris believes he is an astronaut and, of course, “an astronaut’s work is never done, so astronauts do not like to sleep. But their parents do.” Chris’s parents kick him out of their bed and dutifully check his room for aliens. Finally, the possibility of missing tomorrow’s special event helps Chris fall into his favorite dream.

The next day, most everyone on Stag Island crowds into a neighbor’s living room to watch the Moon landing. When Chris discovers that “outer space was the darkest dark ever,” he views his house’s darkness differently. Chris now understands that “the darkness of the universe was so much bigger and deeper than the darkness in his room.”

The Darkest Dark concludes with biographical information about Chris Hadfield’s journey to becoming an accomplished Canadian astronaut. His personal message and photographs encourage young readers: “The dark is for dreams—and morning is for making them come true.”

Board Book Review – Everyone’s Sleepy but the Baby