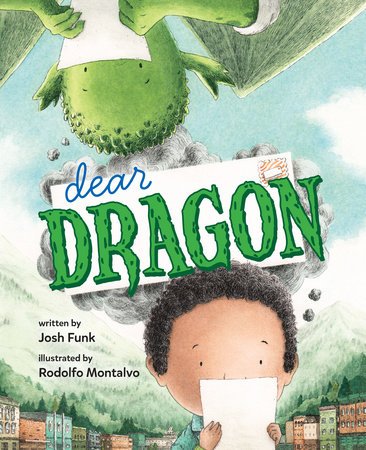 Back in the olden days when kids still wrote letters, I had a pen pal named Melanie Vafiades from London. I never met her so for all I know she could have been a dragon like George’s pen pal in dear Dragon (I mean don’t most dragons live there?), or perhaps she was a unicorn (England’s full of enchanted forests, right?). I’m all for active imaginations and making new friends sight unseen which is exactly what author Josh Funk’s new picture book inspires. Kids’ll love the premise of this endearing story that pairs human students (unbeknownst to them but not their teachers) with dragons as pens pals.

Between Funk’s cheerful, well-paced rhyming text (the students were told to put their correspondence in verse) and Montalvo’s light-hearted, inviting illustrations, readers will get a strong sense of how the two main characters grow from being reluctant about having to actually write something to someone they don’t know, and do it in rhyme no less, to discovering interesting things about each other over the course of the assignment.

The illustrations capture how George, the human, and Blaise, the dragon, innocently interpret the descriptions in each other’s letters based on their personal paradigms. Consider George’s science project volcano (see first image above) as compared to Blaise’s real one, or George’s backyard cardboard fort (see second image) versus Blaise’s and you’ll get the point both author and illustrator have humorously driven home. As the two students continue to write, readers will notice the degree of familiarity increase with every new letter. What ensues when our earthbound boy and his new flying, fire-breathing friend ultimately meet up in person can only be described as pure positivity in picture book form. Funk’s story presents the perfect opportunity to reinforce the important message that you simply cannot judge a book by its cover, although the cover of dear Dragon is pretty darned adorable!