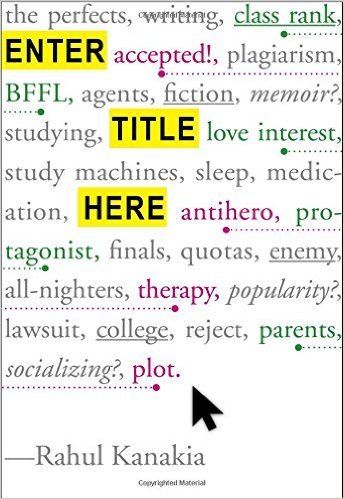 Just in time for back-to-school comes ENTER TITLE HERE from Hyperion. Rahul Kanakia’s debut YA novel examines the fierce competition for college admissions in a fresh, surprising, and funny package, with a bonus meta element for those of us readers who are also writing our own novels. The main character is Reshma Kapoor, a Silicon Valley high school senior who employs unhealthy and unsavory means to achieve her all-consuming end: admission to Stanford.

Reshma is convinced that her application — with its stellar grades but average-after-several-tries SAT scores — needs a hook in order to stand out in the admissions slush pile. She thinks she’s found her “in” when an essay she published in the Huffington Post earns her an email from a literary agent: “If you were to someday write a novel, I’d love to read it.” Boom, goal-oriented Reshma has a new aim: secure a contract with this agent, and write a novel to be under submission (or maybe even sold) in time for Stanford’s Early Action deadline.

And that novel is ENTER TITLE HERE. Or is it? I enjoyed the argument in my head as I read: is this really happening, or is this just for the novel? Reshma the narrator certainly encourages the confusion. She scopes out a brief synopsis in her head, epiphany and all, and then writes a “SEPTEMBER TO-DO LIST” of the experiences she needs to have to write the novel convincingly: make a friend, go on a date, attend a party, get a boyfriend, have sex. In the pages that follow, she sets about checking off each item. Oh, and this isn’t on her list, but no way is she going to loosen her grasp on her school’s valedictorian spot. She won it by hook and by crook, and keeping it is as essential to her plans (and her self-image) as writing the novel is.

You may have guessed by now that Reshma is not a very likable person. When she writes, for school assignments, newspaper articles, or her novel, she maintains two versions: an honest one and a pretty one. But when she meets people face-to-face, “…they start to hate me. That’s because when I speak, I find it hard to create a pretty version.” But even as we dislike much of what Reshma thinks, says, and does, we keep reading. Why?

For one thing, I was curious to find out which of her many enemies deserved the title. There’s her mother, who thinks Reshma should lower her sights from Stanford. There’s her “perfect” classmate Chelsea, who couldn’t possibly be as nice as she pretends to be. And then there’s Alex, Reshma’s Adderall supplier. Reshma blackmails Alex into being her friend (item number one on the TO-DO LIST) and then wonders if she can trust Alex to have her back. Meanwhile, will Reshma ever notice that George, whom her parents allow to live in the basement so he can go to a good school, consistently behaves like a real friend?

Kanakia keeps us rooting for Reshma, in spite of all her faults. We want her to figure out how to stop the train before the wreck. Her mother tries to help her, sending her to a therapist. As a writer, I found some of the funniest moments of the book occurring in Dr. Wasserman’s office. He’s not just a therapist; he’s also an unpublished novelist, and his line of questioning is familiar to any fellow striver: “…you’ve mentioned your agent…Who is she, if you don’t mind me…?” He has lots of advice for Reshma, but it’s never clear. Are the ideas for the novel, or for her life? Does Reshma imagine Dr. Wasserman’s decline into obsession with her plot line and character arcs? Or is he a horrible therapist but a pretty good editor?

I enjoyed ENTER TITLE HERE and recommend it as a work of evil genius that will be especially appreciated by students currently competing in the college admissions rat race. Their parents will like the novel too — though it may send some of them searching their kids’ backpacks for stray Adderalls.

NEVERWOOF: The Dog That Never Barked Written and illustrated by Gabe Jensen (Familius;…

What We’re Reading for Mother’s Day 2022