Tween sleuth Friday Barnes is back, this time to uncover who set her up and why mysterious things keep happening at her private school, Highcrest Academy. 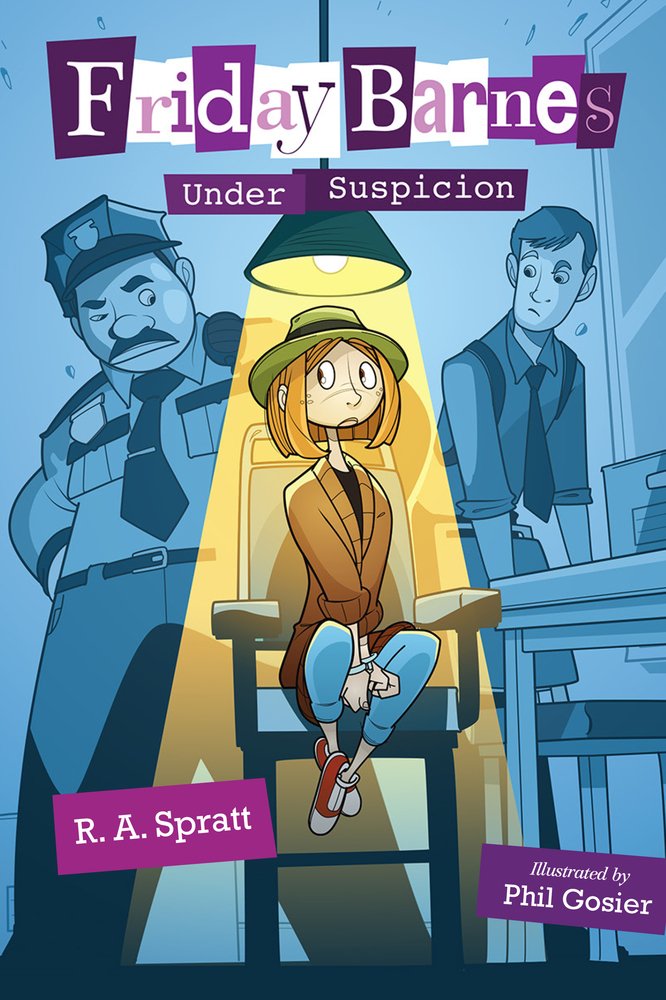 If you’ve been reading Good Reads With Ronna for awhile you’ll recognize R. A. Spratt’s name as the author of the popular Nanny Piggins series. With nine of these books under her belt, Spratt tried her hand at middle grade mysteries with the release of Friday Barnes Girl Detective. Today I’m going to introduce you to this über intelligent student sleuth in her second book, Friday Barnes Under Suspicion, out earlier this month. And frankly, it didn’t matter that I started with book 2 since Spratt has included just enough pertinent backstory to make this book succeed even as a stand alone.

This latest installment features 25 short chapters that are filled with action and lots of surprises. Yes, there’s never a dull moment when 11-year-old private investigator Friday Barnes is around. The story moves at a fast pace and is broken down into one large mystery to solve and several smaller ones. Spratt kept me guessing whodunnit throughout the novel and that will appeal to readers who, like me, love the challenge of putting the mystery puzzle pieces together.

Whether she’s helping to prove her own innocence after a setup or that of a vagrant by locating a missing sapphire bracelet, or catching the home economics class cheat who took credit for a quiche she didn’t make, Friday Barnes solves her cases using brains not brawn. Add to all the enjoyable sleuthing just a dash of tween romance, a fun symbiotic friendship, a satisfying amount of Spratt-style tongue-in-cheek banter, and the sudden profusion of large holes around the campus of Highcrest Academy, and you’ve got the makings of one very entertaining novel. What is happening at Highcrest Academy that’s causing people to appear, disappear, or reappear, and could it all be tied to a past secret or something more recent?

I couldn’t wait to read what escapades the staff and students of this posh private boarding school got up to. Spratt has created an academic environment rife with intrigue. And the fact that Friday uses money earned from prior and current cases to pay her way through school is significant. Friday’s the daughter of physicists who are preoccupied with their own lives so she’s been forced to grow up early and make her own way in the world. She does so with aplomb, occasional embarrassment, and a lot of hilarious dialogue that will keep middle grade readers coming back to Barnes for more. Watch out for book 3, Friday Barnes Big Trouble due this coming January 2017.

Read an excerpt from Friday Barnes Under Suspicion here.