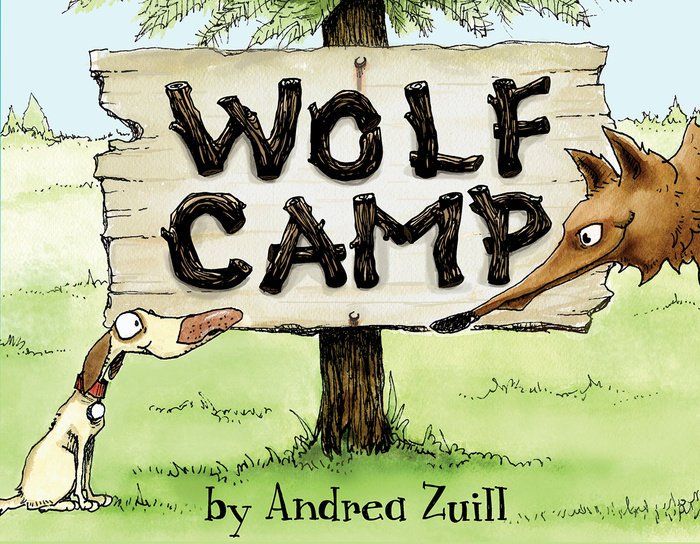 It’s not Labor Day yet!

The shelves at the library and bookstore may be spilling over with “back-to-school” titles, but let’s hold on to summer silliness and camp craziness for just a bit longer. Truly, there is no one season for learning about how to tackle new experiences, face your fears and make new friends. Wolf Camp by Andrea Zuill is a hilarious and heart-warming picture book that will encourage young listeners and little learners to be brave and have fun, and howl in harmony as one of the pack.

Our hero is Homer, a hound dog with scrawny neck and legs, big nose and a tail that wags frantically when he’s excited. Sometimes he acts “wolfish” pouncing playfully on his pink stuffed toy moose from behind the sofa. Homer believes all dogs have a bit of inner wolf, and fantasizes about living like one of the pack, racing through the wilderness with purpose. It seems like a dream come true when an invitation to Wolf Camp (“Where every dog can live as a wolf – for an entire week!”) falls into his kibble bowl.

Homer really wants to go to Wolf Camp. He pesters his human family, bringing the invitation to their attention over and over, until they relent and agree that he can go. “I’m going to be a wolf!” thinks Homer excitedly as he heads off on a big yellow bus. The camp counselors, Fang and Grrr, are actual wolves, sharp-nosed, pointy-eared, shaggy giants. Homer’s fellow campers are a bumbling, fuzzy golden retriever named Rex and Pixie, a teeny-tiny gray Chihuahua. Homer thinks the counselors seem nice, but the wolves appear slightly skeptical about the well-hidden potential in their new recruits. Nonetheless, after a detailed safety talk, the Wolf Camp lessons begin.

Zuill’s pen and ink drawings with watercolor wash are zany, charming and unbelievably expressive. She masterfully contrasts wolf and dog postures and body language, perfectly positioning their poised or clumsy bodies for stalking, howling, tracking and sleeping. The animals’ eye rolls, ear tilts, and tail movements convey oodles of meaning and emotion that enrich the wry, witty text and funny speech bubbles. It’s a guaranteed giggle when Homer pens a classic camp letter to his “people” at home, complaining about the food and bugs.

Wolf Camp is filled with loopy, lupine humor and heart. Readers will root for Homer, Rex and Pixie as they bond, persevere and slowly master the skills necessary for wolf-y, woodsy living. The new pack members succeed in earning Honorary Wolf certificates by the end of the week, but perhaps Homer has been changed forever by his wild experience. You’ll be howling with laughter throughout this silly, sweet and smart story for campers and canines alike.

Where Obtained:  I reviewed a copy of Wolf Camp from the library and received no other compensation. The opinions expressed here are my own.