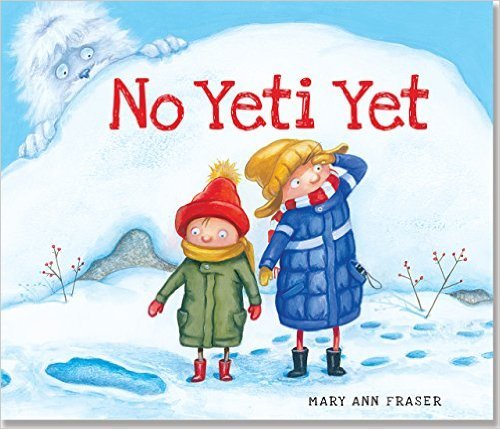 It’s been the year of yeti themed books, and by far my favorite has been No Yeti Yet by Mary Ann Fraser.

As two brothers, identified by height and clothing only, stare at the snowy day outside their window, the older one announces they’re going in search of a yeti, “a shaggy white one.” Why? Well to take its picture, of course! Wouldn’t you do the same? And so begins this whimsical tale that feels like an homage to a personal fave, We’re Going on a Bear Hunt. Only the surprise ending in Fraser’s picture book doesn’t involve closing a door to keep the creature out. Nope! Something truly unexpected happens that’s worth turning every single delightful page for.

From the get go, Fraser’s wintry artwork with its wonderful contrasts of chilly outdoors and warm, colorful indoors, invites reading on to learn more and look for more. See the gentle way the yeti above is holding a bird in its hand (or paw, or whatever yetis have)? Readers are shown there actually is a yeti, but the humor is in the boys never seeing him. I love the image of the yeti covered in snow and the one where the kids walk right over his hiding spot. In fact, when you read No Yeti Yet, I’m sure you’ll agree that the text and illustrations work beautifully together to move the story forward.

The brothers have lots of fun throughout their quest and Fraser masterfully builds anticipation as the boys get closer to the inevitable – the yeti’s cave. Parents reading the story aloud to little ones can point out the hidden yeti or his footprints, while older children will get a kick out of spotting clues (and the yet) on their own.

Once inside the cave, the lads encounter the yeti, and quite alarmed, they flee. The yeti, now in possession of the camera, chases the two brothers all the way home. By this time you may be wondering who your kids will be rooting for because Fraser’s yeti isn’t the least bit scary, making it easy to share No Yeti Yet at bedtime, or anytime for that matter. The takeaway that looks can be deceiving is an important one and this book provides a comfortable way to start that conversation. Oh, and parents, SPOILER ALERT, you might want to have some hot cocoa on hand for when you do.