Travels through England and Scotland 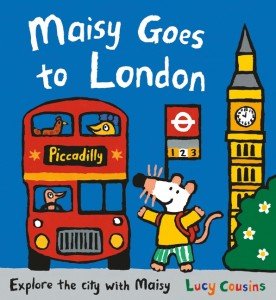 I was raised in England, so I’m partial to books about the British Isles. Luckily, there are so many of them! We begin with Lucy Cousins’ Maisy Goes to London, which is a perfect introduction to the fabulous city for children ages three to seven. Maisy and her friends are sightseeing in one of the most exciting cities in the world, and there’s so much to see and do! They climb the lions in Trafalgar Square and see Nelson’s Column. Right across the street is the National Gallery, home to “so many amazing paintings. Maisy likes the sunflowers best.”  Of course, no trip to London is complete without seeing Buckingham Palace, the Houses of Parliament, and Big Ben. With stops at a park and the Tower of London—“Cyril and Charley love the Beefeater’s colorful uniform”—Maisy and company cover a lot of the most recognizable sites. As always, Lucy Cousins’ delightful artwork and easy-to-understand word choice hit the mark for younger readers. 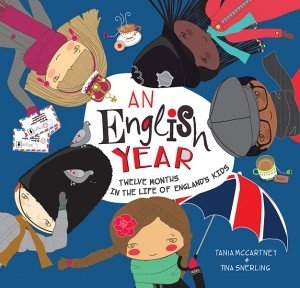 For a broader look at modern England, older readers can check out An English Year: Twelve Months in the Life of England’s Kids written by Tania McCartney and illustrated by Tina Snerling. Five children, Victoria, Aman, Tandi, George, and Ameli, are our guides to festivals, games, traditions, sites, animals, and foods from different parts of England. Each month has a double page spread and is filled with delightful pictures that depict the text. Each spread features about 12 facts for the month. The books is chock full of information! I personally loved seeing the hot, roasted chestnuts in a paper bag for January and the Punch and Judy puppet show for June. The references to lesser-known facets of living, such as “we gobble Jaffa Cakes and Jammie Dodgers” (June) and BBC’s Children in Need fundraiser (November), add to the sense of discovery. Details such as these, in addition to the more mainstream items like Stonehenge and Royal Ascot, go a long way in creating a real sense of life in England. 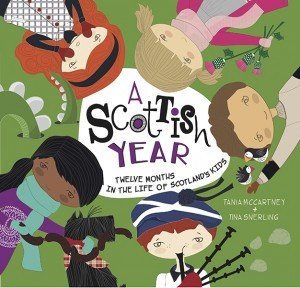 McCartney and Snerling have also created the series’ companion book, A Scottish Year: Twelve Months in the Life of Scotland’s Kids. In similar fashion to the England book, Scotland’s heritage is presented via five children—Rashida, Sophie, Dominik, Isla, and James. We learn that on Twelfth Night, people “take down our Christmas Tree to avoid bad luck” (January) and that “Tartan Day celebrates everything good about Scotland” (April). We’re introduced to blaeberry picking (July) and “redding the house, to bring in a fresh new year” (December). The use of Scottish vernacular (for example, dreich, meaning dull, depressing, dreary weather) and inclusion of celebrations (the Braemar Gathering and the Royal Highland Show) produce a vivid feel for the pride that the Scottish feel for their country.

Readers may realize that more context or detail is needed to explain some of the information in the books. For example, English Year states, “At birthday parties, we play lots of games. Dad tries to give us The Bumps!” We did this when I was a child, so let me explain. The Bumps is when the birthday child is lifted by the arms and legs, and his/her bottom is bumped on the ground the number of years he/she is turning. It’s fun. Scottish Year mentions that in November “we put on our coats and play conkers outdoors.” I have fond memories of playing conkers with my classmates. A conker is a horse chestnut with a shoelace strung through it. Children then aim and hit their conkers at each other’s. Whichever conker outlasts the other, wins. Even though some research may be needed if a reader wants to dig deeper, the basic information doesn’t distract from the charm of the books.

The artwork is adorable. Each book’s characters show features of life at home, school, play, festivals, and so on. Illustrations introduce the months. In Scottish Year, March has a rain cloud hovering over it and rain sprinkling from the M, and September has leaves swirling around it. The text incorporates different colors and line shapes. For example, the text weaves around illustrations, some words are colored, some letters have their circles filled in, and some are in different sizes. The visuals, including the endpages, are appealing and encourage readers to follow the text.

Each book ends with a list of counties/regions and a map of the country filled with fun facts. I had no clue that Scotland has over 790 islands! I did know, however, that England consumes more tea per person than anywhere else in the world. Tea is such a large part of the culture. I appreciated the multicultural aspect that reflects the reality of these countries today. It begins with the inclusion of the children’s characters from Pakistan, India, Jamaica, and Poland, as well as England and Scotland, of course. While plenty of traditional aspects are presented, so are the more contemporary contributions from the various “introduced cultures” that have become a part of the fabric of England and Scotland. For example, in English Year, we learn that “Holi is the Spring Festival of Colours. We cover each other in coloured paint” and that “Eid al-Fitr marks the end of Ramadan. No more fasting!” To ensure authenticity, the books have been produced in consultation with native English and Scottish advisors, school teachers, and school children.

If you aren’t traveling to the British Isles this year, or even if you are, these three books are a wonderful introduction to London, England, and Scotland.