FREDERICK’S JOURNEY:
THE LIFE OF FREDERICK DOUGLASS
An Interview With Illustrator London Ladd 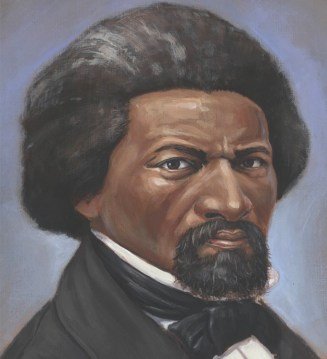 Written by Doreen Rappaport
Illustrated by London Ladd
(Disney/Jump at the Sun; $17.99, Ages 6-8)

What’s the first thing I noticed when picking up my review copy of Frederick’s Journey: The Life of Frederick Douglass? The piercing eyes of Douglass in illustrator London Ladd’s cover portrait and the absence of a title on the front. Then, gripped by the story, I devoured the book, not once, but twice in my initial read throughs of this expertly crafted picture book. Part  of the Big Words series, Frederick’s Journey effortlessly pairs Rappaport’s thoughtful biography of this former slave turned author, abolitionist and ultimately free man with Douglass’ actual words. “Douglass had traveled far – from slave to free man, from illiterate to educated, from powerless to powerful. It had been a difficult journey.” The book ends with this quote from Douglass, “What is possible for me is possible for you.” As a picture book, Frederick’s Journey is brought to life by Ladd’s inspiring artwork. I’ve interviewed this talented illustrator once before, but felt compelled to reach out again, this time for his insight on creating the illustrations and what working on the book meant to him.

An Interview with London Ladd

GRWR: Please tell us how you came to be connected with this project?

London Ladd: The publisher contacted my agent at Painted Words, Lori Nowicki, to see if I would be interested. I read the title of the manuscript [and] the answer was a definite yes. Once I read the through the manuscript I was so moved by it, so eager to get started.

GRWR: How do you decide what medium you’ll use for each book you illustrate and what did you choose for Frederick’s Journey and why?

LADD: For my illustration career I’ve primarily use acrylic with minor touched of pastels and colored pencils on illustration board if necessary. People says acrylics are challenging to use, but I love its flexibility because you can make it look like watercolor with layered thin washes or heavy opaque application like oils. It’s something I’ve always been comfortable using and quick drying is excellent for fast approaching deadlines.

GRWR: You mention in the back matter Illustrator’s Note how deep you dove into the research to really understand your subject including actually posing yourself in front of a mirror and reciting lines. Was there any particular text from Rappaport or quote from Douglass that you found most inspiring for this story’s artwork?

LADD: Rappaport’s text was so excellent with the way she gracefully combined her text with Douglass’ own quotes. But his autobiography was so powerful because you’re getting a first hand account in all its detail of his experience as a slave during the 19th century. Each page was filled with so much raw, honest, brutal, heart breaking material. So many vivid images would pop into my head from sadness, anger.

GRWR: Was there one particular image in the book that most resonated for you?

LADD: I think the first three images [see below] as a whole really resonate for me deeply due to the range of emotions and sounds I hear from the heart wrenching scream of Frederick’s mother as he’s being taken from her, the peacefulness of the river when he’s fishing with his grandmother, and his low weeping as he suddenly realizes his grandmother is gone and now his new life begins in the institution of slavery.

GRWR: You travelled to a lot of places in Douglass’s history, which place made the biggest impression on you?

LADD: Wow it’s so hard to pick one. Visiting his home in Anacostia was powerful. But I’ll have to go with a trip to Rochester in 2006. During my last semester in college I enrolled in an African American religious history course and the final was this amazing project where you had to travel to historical locations involved in the Underground Railroad in and around the Central New York area like Harriet Tubman’s grave and church in Auburn, NY. Well it happens that Douglass’ grave at Mount Hope Cemetery (Susan B. Anthony is buried there, too) in Rochester NY was on the list. The cemetery is huge and his grave is by the front street nearby so vehicles drive by constantly so it can be a little noisy. When walking to his grave it was so quiet with only a slight wind blowing. Being at his gravesite was moving. I just stood there silently for 20 minutes with many emotions going through my mind. After visiting his grave there was this incredible interactive Douglass exhibit at a local nearby museum and I’ll never forget it. So much on display like his North Star press, part of a house with hidden area for slaves, a double-sided mirror that when you dim the lights Douglass’ face appeared on the other side, an exhibit where you lay in a really small area like slave did during the middle passage (that had a strong impact on me) and so much more. Ten years later and it’s still one of my favorite museum exhibits.

GRWR: Not many illustrators get a front cover portrait with no title as an assignment. That’s a huge honor and your cover is outstanding. Can you tell us more about how that decision was made?

LADD: Thank you so much. That’s what makes the Big Words series so unique from other book series because each biography has this beautiful portrait of a well known person with the title on the back. That’s why I worked so hard on trying to not only capture Douglass’ likeness, but his essence.

GRWR: In a previous interview here you said “The human spirit interests me. I love stories of a person or people achieving through difficult circumstances by enduring, surviving and overcoming.” Douglass clearly exemplified that spirit. Who else, either living or deceased would you like to portray next in your artwork or in a story of your own creation?

LADD: Ernest Shackleton! I would love to illustrate Ernest Shackleton and the Endurance. An absolutely amazing story of when, in the early 20th century, he and his crew were stranded near Antarctica for nearly two years and everyone survived. It’s a testament to his tremendous leadership during the whole ordeal.

This Shackleton quote sums up my attitude towards any challenges I face. “Difficulties are just things to overcome, after all.”

GRWR: It’s said art is a universal language. What is it about making art and teaching it as well that speaks to you?

LADD: I think to be able to share with other people is something very important to me. I wouldn’t be here without the help of other people so it’s always been my goal to pay it forward when possible. 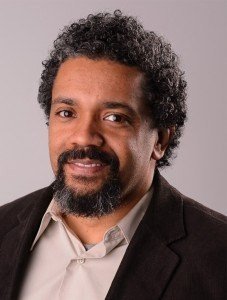 GRWR: Can you share with us anything else about your experience working on Frederick’s Journey: The Life of Frederick Douglass?

LADD: I truly loved working on this book and I’m so thankful to have been part of such a special project. Hopefully young people will learn, enjoy and appreciate the life of Frederick Douglass.

A huge thank you to London Ladd for this candid and informative interview.