LIBRARY OF SOULS
THE THIRD NOVEL OF MISS PEREGRINE’S PECULIAR CHILDREN
By Ransom Riggs
(Quirk Books; $18.99, Ages 13 and up) 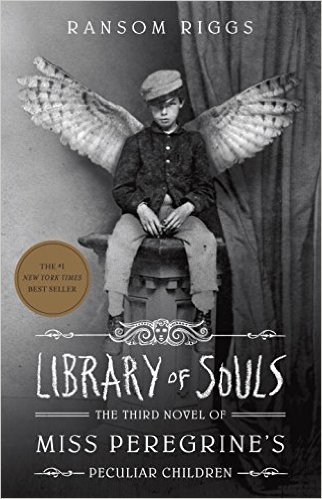 The Miss Peregrine’s Peculiar Children series by Ransom Riggs is an intriguing tale of mystery and magic, inspired by a collection of inexplicable vintage photographs. The story that began in Miss Peregrine’s Home for Peculiar Children and continued in Hollow City, comes to an electrifying end in Library of Souls. Having traveled to a mysterious island off the coast of Wales to try to make sense of his grandfather’s untimely and cryptic death, sixteen-year-old Jacob Portman discovers his grandfather’s oldest and most peculiar friends, including his dearest love, Emma. Jacob fights alongside her and the other peculiars against unimaginable enemies and monsters that threaten their world. When their headmistress, Miss Peregrine, and all her fellow ymbryne leaders of Peculiardom are abducted, Jacob allies with the peculiar children and discovers he has power of his own.

Library of Souls opens as the children are trying to escape their enemies (and the monsters they control) while attempting to rescue their ymbrynes and the many other peculiar children who have been captured. Their journey takes them to Devil’s Acre, a sinister labyrinth of dark alleys and mysterious characters. We struggle along with Jacob and Emma, not knowing whom to trust and fearing the worst for their beloved friends. As Jacob discovers the strength of his powers, he also discovers true friendship and a love he never knew existed. While this particular leg of the story is a maze in itself and takes more than a few twists and turns, it remains a captivating series that comes to a fulfilling end, allowing readers to truly appreciate the extraordinary.