TWO OF OUR FAVORITE NEW HANUKKAH BOOKS
FOR #READUKKAH 2015
& GIVEAWAY 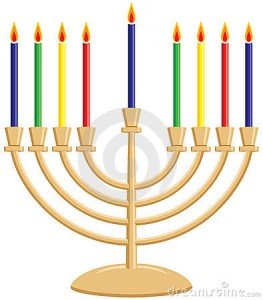 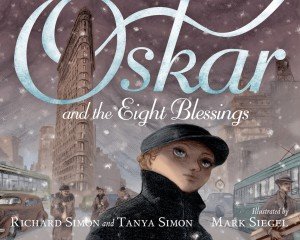 Oskar and the Eight Blessings by Richard Simon and Tanya Simon with illustrations by Mark Siegel (Roaring Brook Press; $17.99, Ages 4-8)

“Oskar’s mother and father believed in the power of blessings. So did Oskar …” and so begins this poignant picture book with four square sepia toned panels showing the Hanukkah Menorah being lit. Yet with the turn of a page, and the colors going black, the family huddling in fear, synagogues are burnt, the storefront windows of Jewish businesses are broken and life as Oskar and his family knew it was forever changed. Oskar and the Eight Blessings focuses on Oskar as a refugee, only the year is 1938 not 2015. He’s come to America, sent by his fearful parents, immediately following Night of the Broken Glass (Kristallnacht), when it became clear that all Jewish people in Nazi Germany were in grave danger. Landing in New York City, with only the name and photo of his Aunt Esther, Oskar must navigate the cold, big city by himself and make his way 100 blocks up Broadway from the pier in Lower Manhattan.

Not only is Oskar and the Eight Blessings a unique and engaging Hanukkah book, so is the way this book is presented. Unlike typical picture books with a title page followed by the story, this tale unfolds with the awful events precipitating Oskar’s departure, and the title page then becomes part of a two-page spread featuring the city’s dramatic skyline as Oskar’s ship pulls into port. It’s not just the seventh night of Hanukkah as Oskar heads uptown, “it was also Christmas Eve.” The first blessing Oskar receives is from a woman feeding pigeons. Sensing his hunger, she offers Oskar a small loaf of bread. This sustenance helps him carry on so that he can reach Aunt Esther before sundown when the Hanukkah candles would be lit. Along Oskar’s journey, he encounters New Yorkers and others (Eleanor Roosevelt) who bestow upon Oskar another six random acts of kindness that tie into that time period and more importantly, that feed his soul and keep him going until he’s walked all the way to Aunt Esther’s, the eighth blessing.

Back matter includes an informative Author’s Note, a glossary, as well as a map showing Oskar’s stops on his long day’s trek. I’m so glad I can share this uplifting Hanukkah story filled with evocative scenes and moving text, and use it as a jumping off point to reflect with my family on our blessings this holiday season. 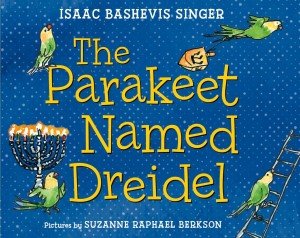 Beloved storyteller and Nobel Prize winner, Isaac Bashevis Singer’s tale of The Parakeet Named Dreidel is brought to life by debut picture book illustrator, Suzanne Raphael Berkson. In its latest iteration, The Parakeet Named Dreidel, perhaps the best known from Singer’s Hanukkah collection of stories from The Power of Light, with page after page of joyful watercolor illustrations, seems ideal for a new generation of readers.

This heartwarming tale of lost and found and love never fails to bring a smile to my face. In this picture book, the narrator Singer is recounting a tale from ten years earlier when he was looking out the frost covered window with his son, David. It was the eighth day of Hanukkah and the Menorah burned brightly on their windowsill. During a game of dreidel, David discovered a parakeet on the ledge outside the window “perhaps attracted by the light.” This casually recollected tale, though actually carefully constructed to keep us turning the pages, takes us through that eventful evening after Singer and son David encouraged the parakeet to come inside from the cold. This yellow-green bird appeared trained and could even play dreidel by pushing the wooden top with its beak, so surely someone had lost and must be missing it. Because of its game playing skills, David named the parakeet Dreidel, but set out with his dad the next day to find its owner. The most revealing trait of Dreidel’s was his ability to speak Yiddish! On occasion, the family heard the parakeet say, “Zeldele, geh schlofen” (Zeldele, go to sleep). Yet despite his uniqueness, the parakeet went unclaimed.

Nine years went by and we see, through Raphael Berkson’s playful art, that Dreidel has grown to be a member of the Singer family, often sitting alongside the author as he typed. By this point, David has become a college student and, as fate would have it, attended a party where, while telling the story of Dreidel, he happened to meet the actual Zelda of whom Dreidel had long ago spoken. She was Zeldele, the original owner. The two college students soon became a couple, Zelda was reunited with her long lost pet, and Dreidel was credited with bringing the pair together. My favorite illustration is the Chagall-like one included here that depicts the loving young couple as jubilant new parents floating amongst all the significant items in their relationship. This book brought home the serendipity of life and the love a pet can bring into a family’s home. Raphael Berkson has selected a wonderful story to show off her talent and make me look forward to seeing more of her work in the future.