EVERYTHING, EVERYTHING
Written by Nicola Yoon
(Delacorte Press; $18.99, Ages 12 and up) 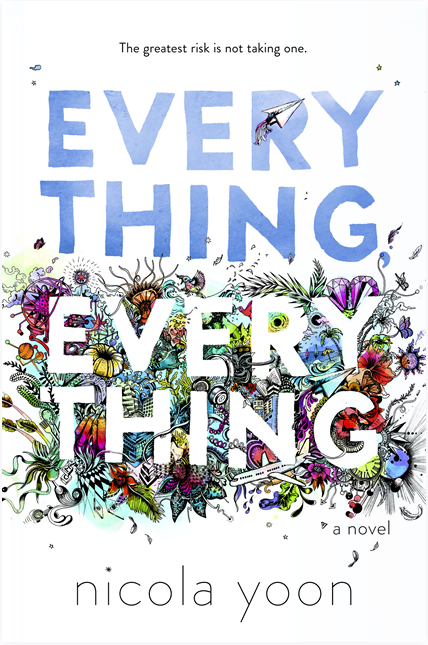 Madeline Whittier has read more books than you, but she hasn’t been outside her house for as long as she can remember. The protagonist in Nicola Yoon’s #1 New York Times Bestseller, Everything, Everything, lives an air-locked, filtered existence, with no outings and virtually no visitors, because she’s “basically allergic to the world.” She has Severe Combined Immunodeficiency, or “bubble baby disease.” While she could have grown to be a weird or bitter eighteen-year-old, it’s clear from the funny drawings and comments with which she annotates her life that she has remained sweet, optimistic and thoughtful.

Since Madeline’s father and brother were killed in an accident when she was a baby, Madeline and her mom are almost everything to each other. Then Olly moves in next door, with his all-black wardrobe, his parkour litheness, and his off-the-wall sense of humor. Madeline realizes she won’t really have everything unless she can leave her germ-free house and be Outside with Olly.

I enjoyed the unusual format of the book, its short chapters that don’t necessarily follow each other, the hand-written notes and drawings. Appropriate as well as charming, the format reinforces how Madeline feels about herself: “If my life were a book and you read it backward, nothing would change.” Before Olly, her “life was a palindrome — the same forward and backward.”

That being said, eventually sequence matters, and the real “Book of Maddy” — Everything, Everything — is different if read backward. In the interest of not giving away too much, I won’t tell you the questions the book made me ask beyond “What would it be like to be a bubble-baby?” But rest assured Yoon’s novel provokes other thoughts as well, about the nature of love, and risk, and life itself.