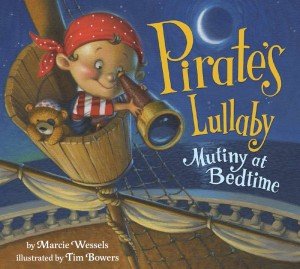 I first heard about Pirate’s Lullaby when Marcie Wessels spoke at a writer’s conference almost a year ago and it’s been worth the wait to get the book knowing all the hard work that went into. So did I enjoy reading Wessels debut picture book, Pirate’s Lullaby: Mutiny at Bedtime? Arrrgh! Can ye hear me, mateys? It’s a keeper alright. Kids love a good pirate tale and with Wessels’ perfectly metered rhyme and illustrator Tim Bowers’ adorable artwork, they’ll be in for a treat.

The story isn’t complicated, but it’s charming and one that so many parents and children will relate to, which is why the subtitle, Mutiny at Bedtime is so apt. Papa Pirate wants his young son, not-so-sleepy Ned, to get to bed, but alas the little scalawag balks at the suggestion.

Bowers portrays Papa Pirate as a kind, smiling man. Wessels gently demonstrates that, despite Ned’s dad being nice, he’s also a limit-setting father, who dearly loves his son and gets a kick out of his stalling antics. Still the laddie must get some shut-eye! Thus the story pits the persistent papa against the procrastinating pirate-in-training in a playful back and forth that never misses a beat.

First Ned has some chores to finish up. Then he can’t locate Captain Teddy, his eye-patched cuddly companion. Could he have fallen overboard?

There’s the requisite request for water followed by a plea for Papa to spin a yarn or two and, last but not least is Ned’s desire for Papa Pirate to sing “a shanty of the oceans vast and deep.” The clever twist at the story’s end will surprise and delight readers young and old.

Of course, Wessels has included all the appropriate pirate verbiage kids love such as:

“Ye’ve got yer mate, ye’ve had a drink,
Ye’ll have yer bedtime tale.
Ye must be getting sleepy.
Ain’t the wind out of yer sail?”

And though Talk Like a Pirate Day is soon approaching, why wait until September 19th to practice your Aye, Ayes, your Batten Down the Hatches and your Yo, Ho Hos? Pirate’s Lullaby just begs to be read aloud with the best pirate voice ye can muster!

It’s hard to resist a well-crafted picture book with artwork that’s warm and inviting coupled with rhyme that’s top notch, so what are ye waitin’ fer, mateys? Add this little gem to your own little pirate’s bedtime book treasure chest so yer both can go catch yer forty winks with satisfied grins on yer faces!

The King of Little Things by Bil Lepp

A Touch & Pull Book For Toddlers

The Nose Knows! My kids loved interactive books when they were toddlers and it will…

A Race to the South Pole

Arrh! Tis a mighty fine review for a treasure of a tale!

Aye, tis worth its weight in pirate’s booty.

And so are you, Ronna! Thank you so much for reviewing Pirate’s Lullaby.

Hooray ! It’s here! I so love this story. What a lovely review, too!

I wrote the first draft of Pirate’s Lullaby in Sarah’s class. She saw its potential and encouraged me to keep working on it. Thank you for your keen eyes, Sarah, and thank you for cheering me on!

Thanks for stopping by, Sarah. Where’s your class?

There is also a program for Children’s Book Illustration.

Yo Ho Ho! Me thinks the release of this PB booty must coincide with “Talk Like A Pirate Day”.

Shiver me timbers! What a great guess! My official San Diego launch party is being held on 9/19, which is, as you know, Talk Like A Pirate Day!

How exciting for ye!!