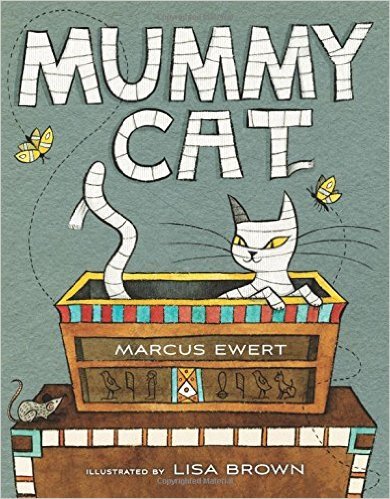 A loyal and loving feline searches for his devoted owner, a young Egyptian queen in Marcus Ewert and Lisa Brown’s clever picture book MUMMY CAT. The catch? He’s just woken from a hundred year’s sleep after having been mummified and entombed in a beautifully decorated pyramid.

For young readers, the tale works on the simplest level as the pet seeks to reunite with his owner. The determined, inquisitive cat is appealing and adorable despite his elaborate linen wrappings. The tomb is bright and colorful, filled with interesting artifacts, a swirling moth, and cute little mice. Even a few spiders and cobwebs are so delightfully depicted that timid listeners will have nothing to fear.

As he wanders though the pyramid, the cat gazes fondly at painted murals showing his past life with the queen, Hapshupset. Indeed, the murals tell a more complex story within the story about a jealous, scheming sibling that complicated the young queen’s life. This aspect of the book will hold enormous appeal for older readers. Looking beyond the captivating mural images, we slowly decode the devious actions of Hapshupset’s sister and her evil lion-monkey.

An author’s note explains mummies, cats, queens and hieroglyphics for readers who want to know more, and seventeen hieroglyphs hidden within the illustrations are spelled out in more detail.

Ewert’s rhyming text is short yet descriptive, moving the story forward at a steady pace. Deep within this maze of stone, a creature wakes up, all alone . . .Spanning the full scope of this once-a-century event, Ewert leads us from the sun setting over hot desert sands into the tomb, through the night, and closing as the sun is beginning to rise. The spare but rich narrative leaves plenty of opportunity for Brown’s engaging, creative illustrations to flourish and add poignant, tender touches.

Just as Egyptian priests tucked magical amulets and symbolic treasures into a mummy’s linens, Ewert and Brown have slipped countless sweet delights into the pages of MUMMY CAT. Turn the pages slowly and savor them one by one. I’m certain you will also be en-wrap-tured by its many charms!

Where Obtained:  I reviewed a copy of MUMMY CAT from my library and received no other compensation.  The opinions expressed here are my own.