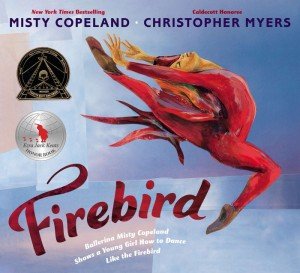 In Firebird; American Ballet Theater ballerina, Misty Copeland, shows a young girl how to dance like the firebird. Copeland, author of Life in Motion, has written a spare but powerful picture book about a young African American girl who dreams of becoming a ballet dancer. Daunted by the process, the young girl compares her ” gray as rain” self to the “swift as sunlight” Copeland, believing that she could never be as good as her idol. Realizing that the girl lacks confidence and is overwhelmed by what lays ahead, Copeland offers encouragement and support in a lyrical conversation between mentor and protégé:

you’re just where I started …

Copeland assures the young girl that, despite the challenges and hard work (“…I  had a thousand leaps and falls …”), her ability will grow. One day someone will need her support:

“then they will look to you in wonder

the space between you and me is longer than forever

Lovely ballet similes and metaphors are woven into a narrative as powerful, yet as graceful as the dancer’s art:

spread an arabesque of wings

And while the narrative is a conversation is between a beginning dancer and an experienced ballerina, Copeland’s message of determination and realizing your dream is an important and inspiring message for all of us.

Using bold and striking mixed media illustrations, award-winning illustrator Christopher Myers enhances the soaring and inspirational text by dramatically capturing the movement of the dance and Copeland’s amazing ability to stretch her body in extraordinary positions. Likewise, his illustrations also depict the tender and affirming relationship between Copeland and her protégé. Myers, the son of the late children’s author Walter Dean Myers, has received multiple awards for his illustrations. Visit Reading Rockets for a selected list of his books and a video interview.

The Afterword contains a poignant message from Copeland about her childhood struggles and how ballet “saved” her. Nevertheless, as an African American, she did not see herself in this almost exclusively white world. With hope, hard work, and support she made it and has turned to supporting other young dreamers like herself to enter the world of Classical ballet.

Copeland has just been appointed the first African American principal ballerina of American Ballet Theater. Visit Misty at her website and see her reading Firebird at the April 6, 2015 White House Easter Egg Roll. A search on YouTube will display many videos featuring interviews and performances. Click on the link to read an excerpt of Life in Motion and see a short video of Copeland discussing her determination to succeed. Earlier this week it was also announced that for two weeks this August, Copeland will star on Broadway in the musical “On the Town.”