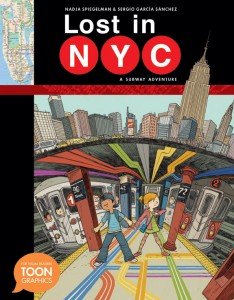 Ever gotten lost on a subway? In New York? I have and I’m from New York! But once you’ve navigated your way around and feel you’ve got the hang of the subway, it’s like you’re on top of the world, not 35 feet underground (like at the 42nd St. Station). You might never take the bus again. 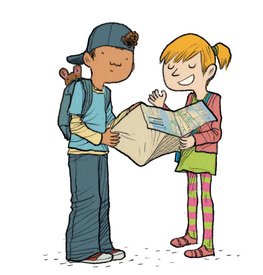 I’ll start this review by pointing out that a purchase of Lost in NYC: A Subway Adventure, is like getting multiple books in one! First there’s the graphic novel adventure featuring Pablo, a boy new to both his school and to the city. Alicia, a classmate, volunteers to partner with him on a field trip to the Empire State Building using public transportation. At the uptown Manhattan subway station (96th St.), the pair get separated from their class and have to find their way alone. Eventually even Alicia and Pablo get separated which may seem frightening, but it’s never presented that way. In fact, it’s empowering for kids to see their peers commuting this way successfully. Demonstrating common sense, the two make tracks individually to the Empire State Building, one on foot, the other using a cross town train. Ultimately, across a crowded lobby, Pablo and Alicia are reunited in time to join the tour, running towards each other like in a scene from a film. They’re clearly overjoyed, but Mr. Bartles, their teacher, is not as impressed.

In addition to the adventure, there’s the budding friendship story. As the bungled journey evolves, Pablo eventually comes to appreciate Alicia’s gesture of kindness to buddy up on the field trip which he so vehemently rejected at the beginning of the book.

“I was only trying help.” – Alicia
“Help?” – Pablo
“What makes you think I need help! I don’t need anything.” – Pablo
“I thought maybe you wanted a friend…” – Alicia

It’s through this friendship that Pablo is able to  look at New York with new eyes and begin to feel at home.

Another draw is the NYC subway system, like an extra character, with its express and local lines, the colorful maps, and the various stops or stations in the city. I was delighted to see my old subway stop in Queens even made it into the book! Fans of transportation trivia will enjoy the enlightening repartee between Mr. Bartle and his students as he educates them on their subway knowledge. I lived in New York for 30 years and had no idea why the Y and U letters were never used. After reading the fact-filled end pages I learned it’s because the MTA (Metropolitan Transportation Authority) worried the public would be confused thinking they sounded too much like “why” and “you.”

Last but not least is the inclusion of archival photographs from old New York taking readers back in time to the 1800s and into the 20th century for a glimpse of what early subway stations and construction on them looked like. There are also more details about the Empire State Building and a Further Reading & Resources for those who, like me, cannot resist finding out more about the Big Apple’s history. Author Spiegelman has packed a plethora of interesting information into this engaging and extremely original book. I had no idea that the Empire State Building, where my uncle once worked, has its own zip code (10118) and had its grand opening on May 1, 1931, 84 years ago today! Lost in NYC closes with Tips for Parents, Teachers, and Librarians to make young readers’ experience of diving into a TOON graphic novel more pleasurable.

I have to give a shout out to the amazingly detailed illustrations by Garcia Sanchez. My favorite is the angled perspective of the Empire State Building as the school children zoom up to the observation deck in one of seventy-three elevators. Early on I noticed a man taking photos in almost every scene, but I didn’t notice the policeman watching him. Sanchez, while on a reconnaissance mission for the book, must have aroused suspicion. In a humorous touch, the artist has cleverly inserted himself and the cop who followed him into the story so be on the lookout!  Between the diverse cast of characters, the compelling storyline and the excellent artwork, I have to say I am very happy to have found Lost in NYC: A Subway Adventure.