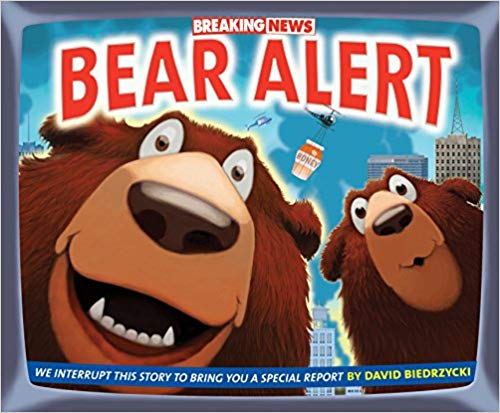 You don’t have to wait long to find the action in Breaking News: Bear Alert, written and illustrated by David Biedrzycki (Charlesbridge, 2014; $17.95, Ages 4-8). It starts on the front cover.

A boy and his teddy bear are watching Our Furry Planet on television. When the host of the show accidentally awakens two hibernating bears, a breaking news report shows up on the screen. Soon the bears are having a grand time, catching a ride on a truck, eating porridge at Teddy’s Diner, and having their turn in a photo booth outside of Bare Necessities Food Mart. Their escapades are caught by the sky cam, but the bears manage to elude the police and animal control officers. While the authorities are preoccupied with the bears’ shenanigans, two sticky-fingered criminals are up to no good. When the crooks rob Paddington’s department store, they’re caught on sky cam. They might have pulled off their caper had they not run right into the bears and their ice cream cones.

The bears get a heroes’ sendoff and go back to their den to hibernate.

What an original and funny story idea! Breaking News: Bear Alert is so cleverly told (don’t you just love the names of the stores?!), and Biedrzycki’s illustrations, done in Adobe Photoshop, made me feel as if I were watching a Hanna-Barbera cartoon. This is a picture book that is sure to grab, and keep, the attention of even the most reluctant reader. In other words, there’ll be no hibernating in your home with this book around.

Read an interview with the author/illustrator, David Biedrzycki here.