The Terrific Timmy Failure Series
Written and Illustrated by Stephen Pastis
is Reviewed by Dornel Cerro.

Introducing “the greatness that is Timmy Failure,” world class detective. 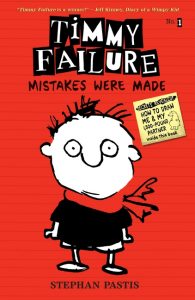 Move over Inspector Jacques Clouseau, author/illlustrator Stephan Pastis has created your youthful equivalent in a humorous series about an overly-confident and hilariously clueless detective who dreams of taking his neighborhood detective agency global. Unfortunately there are some obstacles: his mother – who insists he goes to school, school – where he’s not doing so well, Rollo – his less than brilliant best friend, and Total – his 1500 pound polar bear partner. A polar bear for a partner? Yes, after hooking up with Timmy, Total insisted that the agency name start with his. Hence the less than inspirational agency name of “Total Failure.” (Timmy Fayleure’s name was changed to Failure).

Timmy is also challenged by his evil arch enemy, a fellow student so despised that her “…name shall not be uttered” and her face is blocked out in the deceptively simple illustrations in Timmy’s journal – a history of his invaluable expertise.

Highly imaginative situations, clever word plays, and puns on popular culture are part of the series’ humor and mask some deeper issues. Superficially we have a young bumbling Clouseau-like detective who misses the most basic of clues. When investigating the death of a friend’s hamster, Timmy doesn’t ask obvious questions like has it been fed lately? Rather he asks if the hamster had any enemies. Another friend hires Timmy to find out who toilet papered his house. Timmy initially deduces that only monkeys could have climbed high enough to hang toilet paper from the treetops. Readers will quickly grasp that Total Failure, Inc. is not exactly on the road to international success.

We also see Timmy struggling with an active imagination which causes him to lose focus, impacting his school performance. He has difficulty forming healthy relationships: when frustrated, he refers to other people as “stupid.” He is obsessed with his goal and sees everything in relationship to his detective agency. He treats his mom like an employee, scheduling teleconferences, annual reviews, etc. However, poignant moments emerge: when his detective instincts tell him that his mom seems troubled, he tells her she doesn’t have to read him a bedtime story. Eventually, Timmy benefits from sympathetic adult support. His mom takes charge, structures his life, sends him to a therapist and encourages him to become more involved in the world around him. A new teacher finds an innovative way to engage him in school by “hiring” him to “investigate” the “mysteries” of fractions, and photosynthesis. By the third book, Timmy and the other main characters show much personal and social growth.

While this is not another Diary of a Wimpy Kid spinoff, it will be enjoyed by that series’ fans and reluctant readers. Sophisticated humor, including popular culture references (like “A Hitchhikers Guide to Grade School” chapter title) will tickle the funny bone of older readers. Challenging issues (single parent families, learning styles, and successful relationships) and amazing vocabulary (debilitating, farce, intimidating, and Timmy’s favorite outcry “mendacity”) will engage all readers. This middle grade fiction novel is highly recommended for ages 8-12.

Pastis, creator of the “Pearls Before Swine” comic strip, has an awesome Timmy Failure website with links to YouTube videos, information about the books, author interviews, vocabulary flashcards and more. Visit it here at www.timmyfailure.com.

Series Titles and summary (all titles written and illustrated by Stephen Pastis and published by Candlewick Press):

Timmy Failure: Mistakes Were Made (No.1). 2013. $14.99
In which we are introduced to the young CEO and president of Total Failure, Inc., “…the best detective agency in town…” and the obstacles he faces (mother, school, and an evil nemesis) in realizing his goal of global expansion.

Timmy Failure: Now Look What You’ve Done (No. 2). 2014. $14.99
In which our extraordinary detective enters a school contest to find a stolen globe … but is someone trying to prevent him from solving the case? Join Timmy, Total, and his kooky Aunt Colander, as they set out to solve the mystery of the missing globe, avenge the integrity of the competition, and hopefully win the $500  prize.

Timmy Failure: We Meet Again (No. 3). Release date: October, 2014. $14.99
In which we find our intrepid detective on academic probation and forced to collaborate on a nature report with his evil nemesis. He is hired by a desperate student to find the lost Miracle Report, an old research paper that could give Timmy and others an A++++++. Surprises abound!