DARE THE WIND:
The Record Breaking Voyage of Eleanor Prentiss and the Flying Cloud 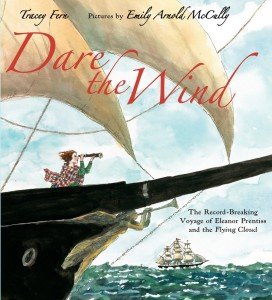 In celebration of Women’s History Month, I am thrilled to recommend Dare The Wind, an exciting picture book biography of a brave and inspiring naval pioneer, Eleanor “Ellen” Prentiss. Born in 1814 in the maritime hub of Marblehead, Massachusetts, Ellen “had always felt the sea tug at her heart, strong as a full-moon tide.” Her father, a schooner captain, said she had saltwater in her veins and gave her lessons in the fine points of sailing and navigation.

While other girls stitched samplers and swept floors, Ellen learned that “A true navigator must have the caution to read the sea, as well, and the courage to dare the wind.” She sailed and raced for fun, then married a man given command of a clipper ship called the Flying Cloud. Ellen accompanies him as navigator on an exciting voyage from New York, around the tip of Cape Horn, and into San Francisco. Despite a broken mainmast and a fierce storm, she charts a course that led the Flying Cloud to set the world record for speed along that route, 89 days and 21 hours. 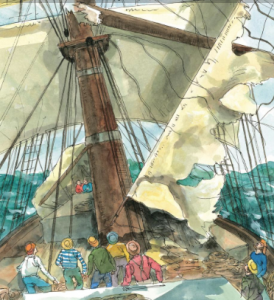 The best picture book biographies transport the reader into a new time, place or perspective. Dare The Wind pairs vivid description and elegant illustrations so effectively that you can almost feel the spray of salt water on your face, and hear the weighty snap of thick canvas sails overhead. McCully’s fabulous seascapes masterfully depict the roiling, dangerous journey through grey-green storms, and the deadly blue calm of equatorial doldrums. Fern’s lovely turns of phrase keep readers deeply rooted in the nautical world, as Ellen’s face “turns white as whalebone” and her heart races “like a riptide.” The tale zips along at an engaging, page-turning pace despite the highs and lows of their daring voyage.

An author’s note and glossary provide supplemental information about Ellen Prentiss’ life and the technical tools of her trade as a navigator. There are suggestions for further reading as well as endpages detailing the 1851 voyage of the Flying Cloud. While wind-driven clipper ships became obsolete in the late 1800s, Fern and McCully’s skillful storybook will ensure that the accomplishments of Ellen Prentiss will continue to inspire young readers to pursue their own groundbreaking journeys.

Where obtained: I received a review copy from the publisher and received no other compensation.  The opinions expressed here are my own.

A One-Way Ticket to Salvation

Rapture Practice by Aaron Hartzler, (Little, Brown and Company, $17.99, YA), is reviewed by Rita…

Gaston, written by Kelly DiPucchio and illustrated by Christian Robinson, is reviewed by Cathy Ballou…

[…] Dare the Wind: The Record-breaking Voyage of Eleanor Prentiss and the Flying Cloud […]