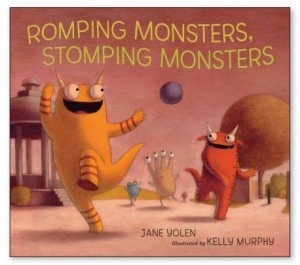 I love all the wild and wacky ways illustrators design monsters in children’s books and the monsters in Romping Monsters, Stomping Monsters are just that – wild and wacky! That’s one of the reasons why this picture book works so wonderfully. The other reason is that the combination of Yolen’s rhymes (short, sweet and silly) with Murphy’s humorous artwork had me lingering on every page.

This sequel to Creepy Monsters, Sleepy Monsters is packed with every type of monster imaginable, but none to scary to put off a youngster at bedtime. Hanging out in a park (aka Creepy Commons), the assorted monsters in Romping Monsters, Stomping Monsters come in many shapes, sizes and colors. Some have scales, others have tentacles. Readers will spot winged, one-eyed, three-eyed, and bulging-eyed monsters. Some monsters are pink, others are purple. I liked the two-legged monsters, but there are also some with four. There’s even a monster with extremely long, stretchy arms, perfect for playing jump rope!

In Romping Monsters, Stomping Monsters, a monster mom (clutching her shoulder bag) takes her two monster kids to play in the park where they’re greet by a bevy of monster buddies. Kids will want to closely inspect every page because there are lots of giggle-worthy antics going on. Yolen’s read-aloud rhymes are fun and offbeat, in other words, ideal for your very own little monster:

What a perfect park Murphy’s envisioned with a lake, fountains, statues, pavilions, and plenty of wide open space for monsters to run around in to their monster hearts’ content. And for a frozen treat when monsters are hot and teeter-tottered out, there’s a monster-sicle vendor. Yolen’s also added a touch of monster mischief around a water fountain, when the bigger sibling of this story goes a bit overboard. But the monster mom insists sibling monsters make up in the end. Does everyone go home from Creepy Commons happy? What do you think?

ABC UNIVERSE IS OUT OF THIS WORLD! by the American Museum of Natural History (Sterling…

Inspired by a True Tale – The Dam by David Almond

Yes, and the fact that it’s so good and a sequel is even more reason to like it. Kids can get Creepy Monsters, Sleepy Monsters and then move on to this book.