I am Amelia Earhart, (Dial Books for Young Readers, $12.99, ages 5-8 ) by Brad Meltzer with illustrations by Christopher Eliopoulos, is reviewed by MaryAnne Locher. 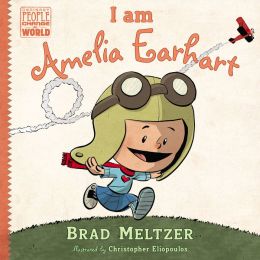 What makes a hero? Someone who accomplishes great things? A person who does what others say can’t be done? An individual who sets a positive example for those around them? In a time when there were distinct lines drawn between appropriate male and female behavior, Amelia Earhart pushed the boundaries and accomplished great things.

In I am Amelia Earhart, one of the first titles published in the new Ordinary People Change the World nonfiction series, Brad Meltzer introduces us to the young Amelia Earhart, a girl determined to soar above the limitations society placed upon her.

The book begins with a seven-year-old Amelia, shunning dolls and dresses for “flying” self-made roller coasters off of the tool shed in the backyard. Hardly lady-like for a girl from her time, but Amelia found it so thrilling (crash landing and all) that she developed a love for flying.

We learn that she took her very first flight at the age of 23, worked in various un-ladylike jobs to save up for her flying lessons and to ultimately buy her own plane, before breaking numerous flying records, which included being the first woman to fly solo across the Atlantic.

For parents who want to encourage their daughters to be strong, capable women, or show their sons that girls can do anything too, this book, with fun colorful illustrations by Christopher Eliopoulos, is the ticket. Let your children’s imagination fly with I am Amelia Earhart.