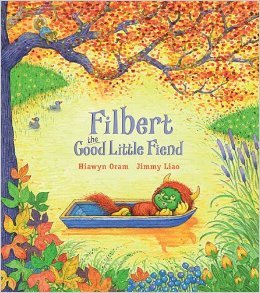 What are a FEROCIOUSLY fiendish Daddy Fiend and FIERCELY fiendish Mommy Fiend supposed to do when their little fiend, Filbert, is so good, so very, very good?

Filbert’s folks insisted he be gruesome and ghastly but it just wasn’t in him to behave like that. He couldn’t be “BOTHERSOME and BEASTLY.” He preferred kind words and caring to hollering and scaring and no one seemed to be happy about this including his teacher, Miss Fearsome-Frizz. Rather than get in a purple-paint fight in class, Filbert hid in the bathroom. This blatant lack of participation earned Filbert the Fearsome-Frizz’s ire so he was sent out to the Good Spot until he could learn to behave “like a proper little fiend.” Well as luck would have it, a little angel kicked out of Angel School crashed landed near the Good Spot where Filbert was relaxing.

Together the two figured out that by temporarily trading clothes and personalities they could give their parents and friends what they’d been asking for. And we all know that sometimes you have to be careful what you ask for. And then what?  In the case of Florinda the not-quite-perfect little angel and Filbert the not-so-fearsome little fiend, their point was cleverly made. The old Florinda and Filbert were welcomed back and accepted for who they were because as the saying goes, better the fiend you know!!

I like the idea of the role reversal portrayed by the main characters as a way for parents to start the conversation about celebrating individuality. I’d certainly recommend Oram’s story, with its alliteration and irony, to read-aloud for story time. Couple that with Liao’s glowing Autumn-hued artwork, a delightful color collision of Sendak meets Scheffler, and you’ve got a picture book perfect for every little monster you know.