April is National Poetry Month so throughout the month we’ll be reviewing different poetry books we think you will enjoy. 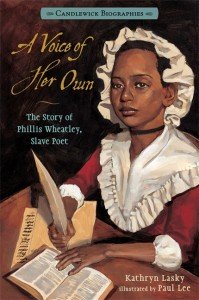 I chose this particular biography to kick off National Poetry Month because I was drawn to it by the title and then moved by this remarkable and intelligent woman’s story. A Voice of Her Own: The Story of Phillis Wheatley, Slave Poet (Candlewick, $14.99, hardcover, ages 8-12; also available in paperback) by Kathryn Lasky with illustrations by Paul Lee is certain to enlighten curious young readers.

“At first there was just blackness. Complete blackness.  Then the blackness dissolved into darkness …”

The year is 1761 when Phillis Wheatley’s story begins with these short yet powerful sentences. I felt compelled to read on about this young girl stolen from her family in Africa. I tried to imagine her fears and sorrow as she was thrown on board a slave ship bound for America and treated more like cargo than a human being. I could not imagine at seven years old being separated from my mother, my life and my country and then enduring a grueling ten-week journey across the sea only to find myself being purchased for a few dollars upon arrival. Phillis’s only good fortune, if it can be called fortune, was that her new owners, John and Susannah Wheatley, were kind Bostonians and the laws for slaves in New England were far more lax than in the South.

Phillis was a quick study and not only learned English but Latin and Greek as well. She taught herself from books Mrs. Wheatley gave her and copied Bible passages by the light of a candle. Her passion for poetry soon emerged and her first published poem was in 1767 in the Newport Mercury newspaper. How many of your children know about this extraordinary black woman who at fourteen years old was visiting the “finest families in Boston” alongside Mrs. Wheatley, to read her poems? I think her story should be shared in every classroom.

Phillis’s earliest poems were written prior to the Revolution, and one particular poem, a tribute to Reverend George Whitefield upon his death, made her famous both “in the colonies and in England.” This English preacher who found slavery sinful, had made a profound and lasting impression upon young Phillis who had found a new kind of freedom through her words. Mrs. Wheatley, who considered Phillis more like a daughter than a slave, was determined to have Phillis’s collection of poetry published but printers in Boston refused to publish “the work of a Negro.” The only choice Mrs. Wheatley had then was to send Phillis to England where the collection was published in 1773.

The book is broken down into nine vividly illustrated chapters, plus an epilogue, notes from the author and illustrator, selected sources, an index and author and illustrator biographies. It’s an inspirational read for anyone interested in learning how individuals can overcome some of life’s harshest obstacles. Phillis Wheatley was kidnapped as a diamond in the rough from Africa and grew to become a polished poet who could shine on even the dullest New England day. Her outstanding contribution to poetry has truly earned her a place in American history.